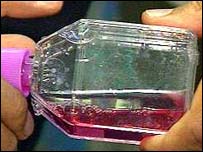 Scientists say they have successfully restored feeling to patients paralysed for at least two years.

A team from the University of San Paulo in Brazil said 12 out of 30 spinal cord patients responded to electrical stimulation of their paralysed limbs.

The researchers harvested stem cells from the patients’ blood, and reintroduced them into the artery supplying the area which was damaged.

The results raise hopes that paralysed people could one day walk again.

Lead researcher Professor Tarciscio Barros said: “Two to six months after treatment, we found that patients were showing signs of responding to tests.

“We still hope we may yet see improvements in the other patients too but already this is a real breakthrough.”

Stem cells – immature “master” cells which have the ability to turn into many different types of tissue – are thought by scientists to a potent source of potential new treatments for many diseases.

Stem cells taken from embryos have already been shown to restore movement in paralysed mice.

However, their use in humans has raised ethical concerns.

Professor Sam Pfaff, of the Salk Institute of Biological Sciences in California, told Chemistry and Industry Magazine using stem cells from the patient’s own blood was likely to be controversial.

He said: “Our concern is that stems cells have the potential to keep growing. They may even do more harm than good.

“If the stems cells are doing anything, it may not be what you would expect.

“They may be providing indirectly a cellular source that is somehow advantageous to the spinal cord, rather than replacing lost or damaged neuronal cells.

“Or they may be releasing growth factors that are helpful to the surrounding tissue.”

‘It’s never been a sad day’