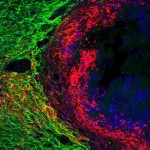 Neuroscientists have long believed that scar tissue formed by glial cells — the cells that surround neurons in the central nervous system — impedes damaged nerve cells from regrowing after a brain or spinal cord injury. So it’s no wonder that researchers have assumed that if they could find a way to remove or counteract that scar tissue, injured neurons might spontaneously repair themselves.

A new study by UCLA scientists now shows that this assumption might have been impeding research on repairing spinal cord injuries.

“For 20 years, we have been applying technologies to prevent glial scarring in hopes of promoting nerve fiber regeneration, repair and recovery, but never observed a positive effect,” said Sofroniew, a professor of neurobiology at the David Geffen School of Medicine at UCLA. “Now we find that disrupting glial scars actually harms nerve fiber regeneration that can be stimulated by specific growth factors.”

The spinal cord is a thick cable of nerve projections called axons that course from the brain to activate muscles, and from sensory organs back to the brain to provide feedback. Unlike peripheral nerves, which re-sprout axons when they are damaged, mature spinal neurons do not regrow axons in the part of the body where the injury has occurred — such as when the spinal cord is cut or crushed — which results in paralysis below the injury.

Doctors have long figured that the major roadblock to recovery was the scar tissue formed by a type of glial cells called astrocytes. This is because, after injury, spinal nerve fibers do not regrow past such glial scars and appeared to be “stalled” within them. That thinking prompted the UCLA researchers to ask a simple question: If that were true, wouldn’t preventing or removing scars encourage the nerves to regenerate?

To answer that question, the researchers evaluated two types of mice — one in which specific genes could be switched on to prevent the formation of scars and another engineered with genes that could dissolve scars after they formed. Using fluorescent imaging, the researchers then traced individual axons to see if they would approach or cross an injury site if the scarring was blocked or obliterated.

In both cases, the axons showed no sign of regrowing through the lesion.

“This clearly refuted the assumption that getting rid of scars would permit spontaneous regeneration of injured axons,” Sofroniew said. “In fact, it hinted that scars might play some sort of positive role.”

The research also revealed glial scars’ beneficial role in an experiment in which the scientists softly flog injured neurons into regenerating — a strategy Sofroniew likens to a “carrot and a stick” approach. In either normal or genetically modified mice, neurotrophic growth factors (the carrot) are infused at the spinal injury site at the same time that additional lesions known to stimulate nerve regrowth (the stick) are applied.

Remarkably, in the normal mice, the approach stimulated robust regrowth of the stalled spinal axons past glial scars and through the injury site. Even more remarkably, the mice that were engineered to eliminate scars showed a pronounced reduction in this stimulated nerve regeneration — and in some cases, none at all.

“This was a very surprising finding,” said co-first author Mark Anderson, a former research associate in Sofroniew’s lab who now is at Switzerland’s École Polytechnique Fédéral de Lausanne. “Scar formation has long been considered the principal impediment to axon regeneration.”

Joshua Burda, the study’s co-first author and a postdoctoral fellow in Sofroniew’s lab, said the finding could prompt a new way of thinking in the field.

“This paper may encourage some to shift their focus away from trying to decrease astrocyte activity, in particular in scar formation, and toward how to exploit it as a way to promote regeneration,” he said.

The team also performed a biochemical screen to identify molecules expressed in scar tissue and discovered relatively high levels of factors that support axon growth. This shows that scars are capable of producing chemical signals, albeit faint ones, that permit axons to grow over them. Thus, future strategies for repairing the central nervous system might involve concocting even more potent mixtures of growth factors, like Sofroniew’s “carrot,” that could be continuously infused or implanted near a patient’s injury.

Burda noted that the finding might have been downright predictable had researchers been thinking in terms of evolution.

“Maybe it’s not surprising that a highly evolved central nervous system wound response, such as scar formation, would play a crucial beneficial function in both wound healing and axon regeneration,” he said.

Added Sofroniew: “Techniques used in mouse models cannot be applied today in patients. But our work is an important scientific step toward developing strategies to get nerve fibers to regrow across severe spinal lesions. It opens the door to an area of research that has been inhibited by incorrect dogma.”