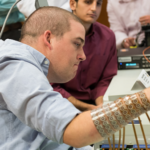 A quadriplegic man has been able to move his fingers, hand and wrist after having a tiny computer chip implanted in his brain. The neuroprosthetic device, which is smaller than a pea, translates neural activity in order to activate paralysed muscles.

Ian Burkhart, a 24-year-old from Ohio, was paralysed following a diving accident six years ago. The injury to his spinal cord left him unable to move his arms and legs. Paralysis is caused by a disruption of signal pathways between the brain and muscles. Previously, researchers have been able to restore movement in humans with the aid of robotics or assistive devices, but movements without these aids has only ever been achieved in non-human primates.

A team from Ohio State University trialled a device created by technology company Battelle to attempt to restore movement in Burkhart using only his own thoughts. Their findings are published in the journal Nature.

The device, implanted into Burkhart’s motor cortex, works by reconnecting the brain to the muscles. It uses algorithms to interpret neural activity and then bypasses the injured spinal cord to directly connect to the muscles through an electric simulation sleeve, which allows Burkhart to control his movements.

He was first able to move using this technology in 2014, showing he could open and close his hand. Following this, he attended up to three sessions every week for 15 months and is now able to perform basic everyday tasks. He can move his fingers individually and make six different hand and wrist movements. This means he can grasp objects, hold a phone to his ear, grasp a bottle and pour out its contents, play a guitar video game and swipe a credit card.

“We’re showing for the first time that a quadriplegic patient is able to improve his level of motor function and hand movements,” said study co-author Ali Rezai, who implanted the chip into Burkhart’s brain.

Burkhart added: “Participating in this research has changed me in the sense that I have a lot more hope for the future now. I always did have a certain level of hope, but now I know, first-hand, that there are going to be improvements in science and technology that will make my life better.”

The team says improvements to the technology are needed to make it more widely available, but add the study shows the device and the principals behind it work. Study co-author Chad Bouton said: “During the last decade, we’ve learned how to decipher brain signals in patients who are completely paralysed and now, for the first time, those thoughts are being turned into movement. Our findings show that signals recorded from within the brain can be re-routed around an injury to the spinal cord, allowing restoration of functional movement and even movement of individual fingers.”

Paralyzed Athlete Eric LeGrand Signs On as Sportscaster With Bucs

Paralyzed men can be fathers