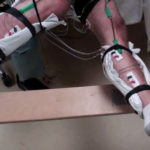 A UCLA professor is helping paralyzed individuals regain use of their limbs through electric stimulation of the spinal cord.

In 2015, Reggie Edgerton, the director of the Neuromuscular Research Laboratory at UCLA, developed a robotic exoskeleton that helped a paralyzed man walk. Though the man is still paralyzed and cannot control the exoskeleton’s movement, Edgerton’s lab plans to do more research to make that happen.

Edgerton’s clinical trial used a robotic exoskeleton in conjunction with a neuromodulation system, a device that provides stimulation to the spinal cord. His lab is trying to obtain funds to perform clinical trials on five subjects with different levels of paralysis, he said.

Edgerton wants to test whether subjects who are not completely paralyzed can control the exoskeleton.

“In the exoskeleton, (an individual) can walk even if they’re completely paralyzed,” Edgerton said. “The question is … with the transcutaneous stimulation, can they regain some voluntary control of the robot so they could be doing some of the work themselves?”

People who are paralyzed cannot sweat much, but with the stimulation, the cardiovascular and sweating responses in his subject were much more normal, Edgerton said.

A team of researchers has continued to train his clinical trial patient and observe his physiological systems, he said.

“Imagine how much the automobile has changed since the beginning,” Edgerton said. “It could be a similar situation with devices that facilitate recovery after paralysis.”

Edgerton is also the founder of NeuroRecovery Technologies, Inc., a company that is developing both external and transcutaneous electrical stimulation devices. Edgerton said he hopes the devices will receive approval from the Food and Drug Administration within two and a half years.

Edgerton’s team is currently building a device for epidural stimulation which applies electrical impulses to the dura mater, one of the membranes that surrounds the spinal cord.

A subject has been implanted by an epidural electrode for hand function, Edgerton said.

“The important part of the stimulation is not just … to improve over time,” Edgerton said. “(Individuals) have to relearn how to perform movements with this new nervous system. … As you’re stimulating, you’re also training.”

Edgerton said he is working in collaboration with Joel Burdick, a professor of mechanical engineering and bioengineering at the California Institute of Technology, in another project that will apply the field of machine learning to his research.

“One of the important things – of the many components in making (the neuromodulator system) clinically successful – is determining what the stimulation parameters (for an individual) should be,” Edgerton said. “The number of variables becomes infinite … we need a quick way.”

He added the lack of an automated procedure would limit the neuromodulation system’s potential as a clinical solution.

Parag Gad, a postdoctoral researcher in Edgerton’s laboratory who did a lot of work with the bionic exoskeleton, said he looks forward to the kind of results the lab might see.

Gad said his day-to-day tasks include performing experiments, writing grants, presenting the lab’s findings at meetings around the world and supervising undergraduates.

Nelly Kokikian, a third-year psychobiology student who works in Edgerton’s lab, said she thinks his work is revolutionary and innovative.

“I joined this lab because paralysis is one of those things there’s no treatment for,” Kokikian said. “Being able to work with someone at the front lines of that … (is) one of the best opportunities I could have at UCLA.”

Edgerton also said he continues to discover greater potential in the neuromodulation field.

“You’re always learning, and learning is fun,” he added. “It’s even more fun when you think it may be able to help other people.”