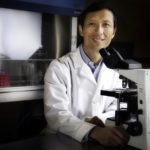 WEST LAFAYETTE, Ind. – A drug developed during World War II as an antidote for a chemical warfare agent has been found to be effective at suppressing a neurotoxin that worsens the pain and severity of spinal cord injuries, suggesting a new tool to treat the injuries.

The neurotoxin, called acrolein, is produced within the body after nerve cells are damaged, increasing pain and triggering a cascade of biochemical events thought to worsen the injury’s severity.

Researchers have now found that the drug, dimercaprol, removes the toxin by attacking certain chemical features of acrolein, neutralizing it for safe removal by the body. The findings, detailed in a paper published online this month in the Journal of Neurochemistry, involved research with cell cultures, laboratory animals and other experiments.

“Dimercaprol may be an effective acrolein scavenger and a viable candidate for acrolein detoxification,” said Riyi Shi (pronounced Ree Shee), a professor of neuroscience and biomedical engineering in Purdue University’s Department of Basic Medical Sciences, College of Veterinary Medicine and Weldon School of Biomedical Engineering.

“An extensive body of evidence exists suggesting the toxic nature of acrolein and its pathological role in a variety of disease processes, prompting the use of acrolein scavengers as a new therapeutic approach for alleviating symptoms and curtailing tissue damage in neuropathic disorders,” Shi said. “Previous studies have shown that acrolein levels increase significantly after spinal cord injury. It may be a key factor of secondary injury, which can expand the damage to adjacent tissue.”

“Free radicals are very reactive compounds produced after trauma and implicated in neurodegenerative diseases,” he said. “Lipid peroxidation has been shown to be associated with multiple pathological processes in trauma and diseases, including spinal cord injury, traumatic brain injury, multiple sclerosis and Alzheimer’s disease.”

Drugs to act as “acrolein scavengers,” have been suggested as a new strategy to reduce the neurotoxin concentration.

Dimercaprol possesses two thiol groups, which are proficient at binding and neutralizing acrolein, making it especially effective in removing the toxin. The drug, also called 2,3-dimercaptopropanol, was developed by British biochemists during World War II as an antidote for lewisite, an obsolete arsenic-based chemical warfare agent. It is now used primarily to treat poisoning by arsenic, mercury, gold, lead, antimony, and other toxic metals. The drug also is used to treat Wilson’s disease, a genetic disorder in which the body retains copper.

“To date, the most common acrolein scavengers have been the FDA-approved compounds containing a hydrazine group, such as hydralazine and phenelzine,” Shi said. “However, these compounds have potential inherent undesirable side effects when used in high concentrations.”

Dimercaprol has fewer side effects than other acrolein scavengers. It can be excreted in the urine and does not remain in the system.

The paper was authored by doctoral student Ran Tian and Shi. The study was funded by the National Institutes of Health, the Indiana State Department of Health and the Indiana CTSI Collaboration in Biomedical Translational Research Pilot Program.

The research dovetails with the goals of a recently formed Purdue Institute for Integrative Neuroscience, at the university’s Discovery Park. The institute spans 25 departments and includes around 100 faculty engaged in neuroscience-related research.

Future research may include work to test the drug with laboratory animals and in clinical human studies, which is feasible because the drug is already approved by the U.S. Food and Drug Administration.

Acrolein is one of the most toxic byproducts of lipid peroxidation which has been shown to be associated with multiple pathological processes in trauma and diseases, including spinal cord injury, multiple sclerosis, and Alzheimer’s disease. Therefore, suppressing acrolein using acrolein scavengers has been suggested as a novel strategy of neuroprotection. In an effort to identify effective acrolein scavengers, we have confirmed that dimercaprol, which possesses thiol functional groups, could bind and trap acrolein. We demonstrated the reaction between acrolein and dimercaprol in an abiotic condition by Nuclear Magnetic Resonance (NMR) spectroscopy. Specifically, dimercaprol is able to bind to both the carbon double bond and aldehyde group of acrolein. Its acrolein scavenging capability was further supported by the results in vitro where we showed that dimercaprol could significantly protect PC-12 cells from acrolein-mediated cell death in a dose dependent manner. Furthermore, dimercaprol, when applied systemically through intraperitoneal injection, could significantly reduce acrolein contents in spinal cord tissue following a spinal cord contusion injury in rats, a condition known to have elevated acrolein concentration. Taken together, dimercaprol may be an effective acrolein scavenger and a viable candidate for acrolein detoxification.

Integrated dance gives those with disabilities an equal opportunity