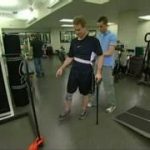 Eleven-thousand people in the United States suffer from spinal cord injuries each year.

Men are more at risk than women for this type of injury, accounting for 80 percent of them. Those between the ages of 16 and 30 are most likely to suffer such an injury. Most of the time, a spinal cord injury will result in permanent paralysis and loss of sensation below the area of the spine where the injury took place.

Imagine a fun, harmless sports game turning into your worst nightmare. That happened to Duane Morrow, an avid rugby player, who suffered a paralyzing neck injury during a game — except he didn’t know it until the following day.

After the game, Morrow’s neck and shoulders felt sore, but the injury didn’t present itself until the next day while he was sitting in a business meeting. Morrow’s right leg started falling asleep.

“Within 15 minutes I was laying on the floor gasping for breath, paralyzed from the chest down,” he said.

Morrow was rushed to the hospital where an MRI revealed a disc slip at the C6-C7 Vertebrae. Doctors told him there was a 99 percent chance he would never walk again, but thanks to new technology, Morrow’s fate changed.

Functional electronic stimulation (FES) technology involves a wireless electronic stimulator worn just below the knee. It provides electrical stimulation to the front of the shin bone, or the tibialis Anterior muscle. The device helps pull the ankle and toes upwards, allowing the toes to lift off the ground instead of dragging, which is typical in a paralyzed patient who cannot move their toes. This motion of the ankle is called dorsiflexion.

The idea of using electrical stimulation to assist with lifting toes off the ground is not a new idea, but it being wireless is. With a wireless device, patients do not have worry about carrying around a large box full of wires.

The electrical stimulation device has three components: a cup that sits below the knee, a heel switch that goes inside the shoe and a hand held remote. The hand held remote is not noticeable, as it can be worn in the form of a necklace, bracelet or belt latch.

The device relieves pressure as the heels come up and signals electrical stimulation to assist with picking up the foot and toes. The technology can restore function to patients with strokes, head injuries and spinal cord injuries. Being able to function and complete day-to-day routines makes a world of difference for patients.

The machine costs around $6,000, but for many, granting movement back into the legs is worth every penny. When a person buys the technology, experts say it is best to go to a clinic where a Physical Therapist can set it up. The placement of the electrodes is individual and so are changes in frequency. Parameters can also be set up to the person’s liking.

For those who cannot afford to have electrical stimulators, they can rely on modern wheelchairs and computer devices. Modern wheelchairs are new and improved, and made of light-weight materials. Some are even capable of climbing stairs and traveling through rough terrain.

New computer devices can also help make life easier for those with spinal cord injuries. Voice activated computer tools can answer and dial phones as well as help with cleaning, reading, paying bills and dressing. It’s hard for doctors to make an adequate prognosis immediately after an injury, as recovery usually occurs between a week and six months. Injury is likely to be permanent if it persists for 12 to 24 months; however, Morrow is evidence that there is hope for recovery.

Motorist rescued after 36 hours on freeway