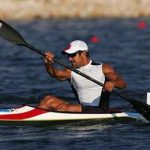 Rami Zur went to the 2004 Summer Olympics in Athens, Greece in search of a medal in sprint kayaking. He wound up instead with a titanium plate.

Now, thanks to some good fortune, good medicine and a lot of hard work, the Newport Beach resident and member of the Newport Aquatic Center is preparing to compete in his third Olympics in the single men’s kayak 1,000- and 500-meter events that begin Monday and Tuesday, respectively.

“I’m lucky and I’ve been blessed,” Zur, 31, said of his latest Olympic appearance. “For most people, the Olympic Games is a once-in-a-lifetime opportunity. It’s an unbelievable feeling and it’s very humbling to me to be entering my third Olympics, something not too many people get to achieve.”

Zur’s third Olympics, representing the United States for a second time after debuting in 2000 competing for Israel, is easily his most unlikely. And that has little to do with his advancing age.

Zur, in fact, said he is fortunate to have avoided a wheelchair as a quadriplegic, after sustaining a frightening spinal-cord injury soon after he finished competing in Athens.

“It was the afternoon after my last event [in 2004],” Zur recalled, “and I was trying to relax at a swimming pool in the Olympic Village.”

Instead, he slipped while jumping into the pool and accidentally struck the top of his head on the shallow bottom. He received a gash on his head, but otherwise felt OK, until he awoke the next morning and had trouble lifting his head off the pillow.

“I got some stiches and I thought I was fine,” he said. “But, three days later, I found out I had injured my spinal cord.”

Zur, at the urging of one of his friends, finally requested X-rays on his neck and results were as threatening as they were surprising.

After weeks of restricted movement to allow the swelling to subside, Zur returned to Orange County to undergo surgery.

“It was really delicate carpentry,” Zur said of the procedure in which a cadaver bone, a titanium plate and some screws were used to fuse his C-5 and C-6 Vertebrae.

The procedure created a loss of some Range of Motion, said Zur, who months after the surgery was paddling again, never thinking that he would ever reclaim his world-class status.

“I was doing a lot of ocean paddling and eventually decided to do an extreme open-water distance race in Hawaii,” Zur said. “I paddled from Molokai to Oahu, working through some 20-foot swells and 40-mph winds. My love for the sport returned and, I thought, if I could do one of the hardest marathon races, I could make it to another Olympics.”

Zur eventually reclaimed national championships at 500 meters in 2006 and ’07 and beat out a handful of much younger competitors for a berth in Beijing.

“I actually was beaten in the 500 for the first time in national competition since 2002,” he said. “But that kind of competition wound up pushing me ever harder.”

“I was fifth in the world last year and I’m in pretty much the same situation coming into the [Beijing] Games,” Zur said. “I’d say there are about 10 guys who could all finish in the top five on any given day. With a really good day and a little luck, I feel like I could win a medal. I’m trying to really stay positive and trying to just be very productive.”

Though still an ardent competitor, Zur, who grew up near the Sea of Galilee and began kayaking as an autonomous alternative to his frequent sailing outings with his father, said the injury has created a slight shift in his attitude entering Beijing.

“I really feel a lot different than my previous two Olympics,” he said. “I don’t feel any pressure, this time. Whether or not I come home with a medal will not determine whether or not I experienced failure or success. I think I’ve proved that if you don’t put limits on yourself, you really want something, and you have good people around you, you can overcome a lot of adversity.”

These Modular, AI Wheelchairs Can Watch for Obstacles Ahead