Got your bars down? 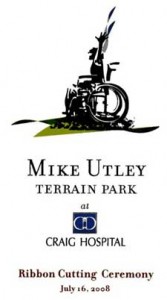 Anti Tip Bars that is!

Craig Hospital has been rated every year in the Top Ten Rehabilitation Hospitals by US News and World Report since the ratings began eighteen years ago. Today, Wednesday July 16, 2008, Craig Hospital raised the bar in its rankings with the ribbon cutting ceremony of the new Mike Utley Terrain Park thanks to the generous support from the Mike Utley Foundation, the Cloverleaf Foundation, the Colorado Garden Show and supporters of Craig Hospital. A dream visualized by John Minden and the Craig Hospital Physical Therapy Department became reality today!

Mike Utley, who was the starting Right Guard for the Detroit Lions and suffered a Spinal Cord Injury in 1991; Mike did his rehabilitation at Craig Hospital in Englewood, Colorado. As you may remember, Mike flashed the crowd a “thumbs up” as he was being taken off the field. Mike is still a symbol of inspiration wherever he goes.

The President of Craig Hospital Dennis O’Malley and Physical Therapist John Minden spoke about the park followed by remarks from Mike opened the festivities.

This is not your ordinary terrain park when you think about terrain parks, this term has been associated with snowboarding at ski resorts over the years, but this new terrain park is a place where the newly injured Spinal Cord Injury (SCI) or Traumatic Brain Injury (TBI) patient can learn the finer intricacies of maneuvering their wheelchair or body over and around many obstacles in life just getting from point A to point B.

The following are just a couple of things that the healthy back or brain my tread over without giving it a second thought. A series of 3 inch steps spaced 18 inches apart, an 8 inch curb, or a paved river rock walkway, these are elements that can change the course of one’s outing from a successful fun day to a day filled with danger, frustration and dejection.

Now they can meet and beat these challenges head on with support from the PT department before they are ever released from the hospital, they had to drive some distance to find all the elements to be able to provide quality training in the past. To wind things down a demonstration on what the park is all about was put on by some current Craig patients.

Over 100 brick sponsors were in attendance today in the warm 90+ degree sunshine. After the ribbon cutting, cake and refreshments were served in the Craig Gymnasium where you could meet and greet Mike accompanied by the smooth sounds played by Craig Staffers, Victor Towle and Kenny Parks.

Additional funding for this project was made available by buying commemorative bricks in three different sizes and these bricks makeup some of the terrain park surface. Bricks, curbs and a bench were purchased by donors who have a passion for, and believe in, the work the dedicated staff of Craig Hospital does every day to rebuild lives.