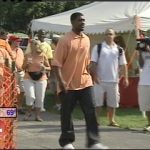 HAMBURG, N.Y. (WIVB) – A devastating injury during the Buffalo Bills home opener, left many doctors thinking Kevin Everett would never walk again. But he’s back on his feet, and even hosting a fundraiser to help others with spinal cord injuries.

Kevin Everett is called a miracle man and the 12th man is on hand to meet at a tailgate party which leads up to Monday’s inaugural Kevin Everett Golf Classic at Brierwood Country Club.

Former Bills player Kevin Everett said, “It’s a blessing to be here, standing up here. I am blessed to be here.’

Everett is here and standing, a miracle of sorts considering his life was on the line following a devastating tackle during last season’s opening game at Ralph Wilson Stadium.

The tackle ended his career, but Everett is back to raise money to help people affected by spinal injuries. Money raised will stay in western New York.

Everett said, “This is where I got my start, fulfilled my dream of being an NFL player. So I feel obligated to come back and do something for the community.” 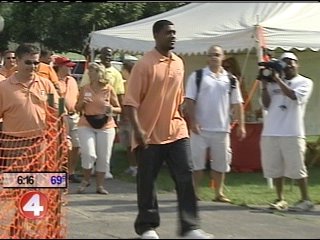 Silent and Chinese auctions allowed fans to be part of the play to raise money.

Everett’s determination to get back on his feet is providing inspiration. His spirit is strong as moves on with his life.

Everett said, “I’ve been through something really traumatic in my life. But I didn’t let it get me down. I remained positive.”

Everett is on the sidelines when it comes to the game, but he’s still working hard to be the best he can be, ten months after his nightmare.

Everett said, “I’m up moving around, but I still have some fine tuning to do. That’s the aggravating part, the small stuff that I’ve got to get correct right now.”

Making a bid for Beijing

Atlanta rehab hospital to provide free care to some vets with...