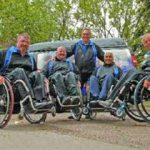 Every mile that four Paraplegic athletes taking part in the Wheel to Walk tour put behind them brings them that much closer to their destination of St. John’s, N.L.

Every donation of 30 cents they receive along the way makes it that much more likely they’ll be able to walk again.

Charlie Cetinski, Les McLaughlin, Chuck Mealing and Harvey Uppal are riding handcycles — recumbent tricycles equipped with hand cranks — across Canada to raise money for research into treatment for spinal cord injuries. By the time they finish their journey in September, they hope to have raised $10 million, or the equivalent of 30 cents from every Canadian.

“All we ask is (the cost of) two sips of coffee — once,” said Cetinski, who was paralyzed in 1997 when an airplane he was piloting crashed shortly after takeoff.

The four athletes were inspired to embark on the cross-country trek by some very promising research coming out of McMaster University in Hamilton. The research team, led by Dr. Michel Rathbone and Dr. Shucui Jiang, has successfully repaired injured spinal cords in laboratory rats using nerve cells transplanted from the animals’ digestive nervous systems.

The money raised during the fundraising tour is expected to provide the team with the resources it needs to continue the research and begin clinical trials on human patients.

Cetinski is confident that the research will put Canada on the map as the place where an effective treatment for spinal cord injuries was discovered.

“We already know how to do it. All we have to do now is prove that it’s safe,” he said.

The tour left Victoria on June 10 and stopped in Regina on Monday. Blustery conditions that morning forced the men to move their press conference indoors, but their road manager, Jim Anderson, noted cheerily that the wind would be at the athletes’ backs when they resume their journey.

“Thank God for the tailwinds from the west,” he said.

Looking back on the first four weeks of the journey, Cetinski said the Rocky Mountains were particularly arduous for the riders.

“We felt like Hannibal with his elephants (moving) across the Alps,” he said. “But after that, (the road) flattened out, and the wind got behind us and helped us along.”

Despite the challenges, Cetinski said he and the other riders received plenty of encouragement and support from the people they met along the way.

“Western hospitality is exceptional. I have to say that,” he said.

For McLaughlin, the journey is also his first opportunity to see much of the country outside of his native Ontario.

“The scenery that we see (from the handcycles) is unbelievable … This is a dream come true,” he said.

McLaughlin is hopeful that the research will lead to his recovery from the spinal cord injury he suffered in an ATV accident in 1999. He looks forward to the day when he’s able to participate in more activities with his family.

“I do stay active, but being in the chair kind of limits my involvement with them,” he said.

McLaughlin said he decided to participate in the fundraiser after touring the research facility at McMaster and seeing for himself the rats that could walk again following the experimental cell-transplant procedure.

“I wouldn’t be here if I wasn’t confident (in the research). I’d be sitting back in my office making money,” he said.

Donations can be made at all TD Canada Trust locations across Canada or online (www.wheeltowalkcanada.org).

People with a Spinal Cord Injury Now Can Empty Their Urinary...