Think of it as the cost of the first two sips of a morning coffee. 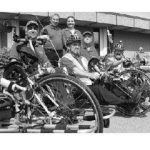 “Thirty cents, that’s all we have to get from each Canadian and we’ll have the $10,000,000 for the researchers to go ahead with doing more for the cure for spinal cord injury. They’re so close, all they need is the money. We have to let people know what’s happening,” said Charlie Cetinski, 65, a master electrician and entrepreneur, who got a spinal cord injury in a flying accident 10 years ago.

“This ride across Canada gives us hope and it’s hopeful for the 42,000,000 people around the world in wheelchairs and those with neurological conditions that could be helped by this research. We all hope to be walking in four to five years.”

Cetinski and three friends with spinal chord injuries, Les McLaughlin, Harvey Uppal and Chuck Mealing, all of Ontario, are biking across Canada starting from Victoria June 10 and expecting to end in St. John’s, Nfld. in early September.

The research they are supporting was done by McMaster University team led by Dr. Michel Rathbone and Dr. Schucui Jiang, who successfully regenerated the chronically injured spinal cords of rats enabling them to walk again.

This medical breakthrough was made possible by the use of the rats’ own cells from the nervous system of the intestine being transplanted into the spinal cord, and the use of one of the body’s natural substances to stimulate cells in the injured spinal cord to grow and produce cells that insulated the damaged nerve fibres. This research could also help people who have had strokes, Alzheimers disease, Parkinson’s disease and other neurological diseases. Increased funding will speed up the research and help make trial treatment possible for human subjects in the next few years.

“I look back on when I used to run 45 K a week before I broke my back and then I met Charlie and realized I could still be an athlete,” said McLaughlin, who was injured in 1999 when he was an emergency response technician. He continued to work with Toronto Hydro and is eager to do what he can to help the research.

“If they can fix the rats in Hamilton, they can fix us. The good part is that it uses the body’s own cells so there are no ethical or religious considerations. The research is amazing, that’s why I’m so pumped to be able to do this.”

Mealing was injured in an accident at an amusement park 26 years ago when he was 18. “I don’t want kids to be in chairs anymore. I was in a chair when I was so young. The ride has been great so far. I’ve never been out of Ontario and I’ve never seen so many beautiful sights. I’m looking forward to the rest of the trip,” he said. He works building houses and decks from his wheelchair.

Uppal, an electrician, was injured in a workplace accident in 1989 and continues to run his own business.

Vernon Acting Mayor Buffy Baumbrough congratulated the team and said she would wear the team shirt to the next city council meeting.

“It is a pleasure to be a messenger for you. You are setting an example for each of us in your determination and courage,” she said.

The team’s next challenge is through the Rockies.

“It’s our duty to do this. People fight wars for their country. We have to get out and fight this condition. I was in Vernon 30 years ago. I drove here, and next time I come back, I’ll be jogging,” said Cetinski.

For more information, to make a donation (charitable donation receipts for donations over $20) or to check out the trip blog, visit www.wheeltowalkcanada.org.