One man’s quest to walk again 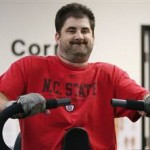 Editor’s note: Paralysis after a spinal cord injury brings wrenching decisions: Do you accept it as permanent and adapt, or do you refuse to resign yourself? John and Marci Pou took the latter course after his accident, embarking on an arduous quest for Rehabilitation, recounted in a three-part serial narrative. Part I tells how the couple chose to gamble on a different kind of therapy. First of three parts.

It was only a chair, but it had become his purgatory.

Each day that John Pou spent in the wheelchair, his spirit seemed to die a little more. It was a perpetual reminder of the calamity that had brought him and Marci, even the kids, to this place.

The chair stood for all that was lost: A promising career, a vigorous life spent fishing the lakes of North Carolina, future plans conjured when things were perfect — plans that seemed impossible now.

Their home, too, felt like a taunting monument to John’s inadequacies: The pool where he could no longer swim with Chase and Kacie, the front door he couldn’t enter without a makeshift ramp for his wheelchair.

That chair, affixed to him like an unwanted limb.

It had been eight months since John shattered his C-5 vertebra diving over a wave during a family vacation. Eight months spent in either a hospital bed or that detestable chair.

Eight months, also, for Marci to hunt for the miracle that just might bring him and their family back from despair.

And now, staring at her laptop, she prayed she had found it.

On the video, a quadriplegic was doing leg pushes on a Total Gym, riding a stationary bike — walking, even, with support crutches in each hand. His wheelchair was parked behind him.

Marci clicked on another link and saw a paralyzed man lifting himself, while grasping a bar, from a sitting position to standing.

John couldn’t even reach for a glass of tea without losing his balance and flopping forward in his chair.

“How are they doing that?” Marci thought.

She studied the clips again. Then again.

It was an April night in 2006, and John was in bed with a urinary tract infection — their latest taste of misery. But sitting at her kitchen table, looking at videos of the clients at this “recovery” center in California, Marci felt a trace of optimism return.

She read about the program that promised added muscle mass, fewer health problems, greater independence and restored function — all through intensive exercise.

This place wasn’t about learning to live in the chair, but trying to get out of it. For good.

“He could be one of those guys,” Marci thought. “He’s going to walk.”

For the first time since the accident, she had something to hold onto.

If only she could get John to grab hold of the dream, too.

Accept fate or fight back?
When tragedy and life intersect, do you accept the hand you’re dealt and adapt — or do you refuse to resign yourself to what may be inevitable, despite what the doctors say and what your own demons whisper?

In searching for answers, John and Marci opened themselves, and their family story, to a reporter, speaking freely over 18 months of interviews and sharing intimacies — from journals and dinner-table debates to extensive medical records.

This tumult was new for them. He served in the Army during Desert Storm and was a 10-year veteran of the Charlotte-Mecklenburg Police Department; she had worked 20 years at Presbyterian Hospital in Charlotte, N.C. But she was an information technology specialist, and he had never had to fire his weapon as a policeman.

John Pou was a North Carolina boy through and through, a daredevil who spent his younger days hurtling over creeks on his motocross bike.

On his first date with Marci, he pulled up in his ’78 Pontiac Trans Am. A friend warned that Marci might think him a redneck. But Marci saw something else: a quiet strength that would become the backbone of their 13-year marriage.

“My angel,” she called John.

With her sweet smile, Marci looked like the girl-next-door, but she was also a tough-as-nails tomboy. She always wore a brave face through the worst storms, including her own battles with lupus and rheumatoid arthritis. “Don’t tell me I can’t,” she’d say.

Together, John and Marci lived their lives by the Golden Rule. They were the kind of folks who wouldn’t just lend a hand in times of trouble, but a bed, a hot meal, a hug and prayers.

Then came Aug. 22, 2005, and Chase sprinting across the sand to Marci at Topsail Beach, their annual family vacation spot on the North Carolina coast.

Marci had taken their 5-year-old daughter Kacie back to the motel to change. Chase built sandcastles while John went for a swim.

Marci looked at her little boy. He shouldn’t cry wolf, she said. But Chase was insistent.

“No, Mamma!” he said, firmly grabbing her arm.

Marci looked down the beach and saw John on his back on the sand. She ran.

“Help me,” her husband mouthed, unable to speak.

John never lost consciousness. Not in that awful moment when he dived over a wave and felt his head hit the sand as though it were a stack of bricks. Not in the moments after, when his body went limp and he feared he would drown.

When the paramedics arrived, they put him in a neck brace on a backboard and asked: Can you move this? Can you feel this?

John had broken his neck, crushing the fifth Cervical bone of the spinal column. Doctors believed part of the shattered bone cut into his spinal cord, leaving a Lesion along the bundle of nerves that carries impulses to and from the brain and controls the body’s Motor and sensory function.

In surgery the morning of Aug. 22, surgeons rebuilt John’s C-5 vertebra using bone from a donor bank, then screwed a titanium plate from his C-4 vertebra to the C-7 to keep the spinal column stable.

The next day, the doctor delivered the diagnosis the couple expected. Once the initial swelling subsided, John might regain some function, but worst-case scenario: He would be paralyzed from the chest down, meaning Quadriplegia, or loss of mobility in his legs and at least partial loss of his arms.

He was 36 years old and had been a 210-pound picture of health. He’d built his own barn on the five acres where they lived in Iron Station, outside of Charlotte. Now he couldn’t even pick up a hammer.

Their life, their goals, had been simple: Marci, 39, was going to retire in eight years, John not long after that. They’d thought about starting their own business buying and fixing up homes. They planned on growing old in their dream house, sitting around the fireplace on holidays with grandchildren.

Instead, rehabilitation became their life. They spent two months at the spinal cord injury program at Shepherd Center in Atlanta, then another two at a Veterans Administration hospital. The most basic living skills had to be taught and relearned — how to brush teeth with hands that didn’t work, how to eat using a wrist cuff and adaptive forks and plates.

About a week into their stay at Shepherd, John and Marci were brought to a conference room and listened as John’s doctor explained his injury. Usually by this time, he told them, the level of function you have is all you’re going to get back.

John was in a power wheelchair, with a chest strap holding him in place. Yet the doctor was telling them: This is your life.

John wondered how he would ever live like that. Marci simply refused to believe it. Where were the options? She wasn’t hearing anything about recovery. Only adapting, accepting and learning to live in the chair.

They were given brochures about adaptive equipment and a list of “possible activities,” including billiards, board games, books on tape.

They arrived home with two loaner wheelchairs and no plan.

After a few months, they tried an outpatient rehab center, where John rolled up to an arm bike and worked out from the wheelchair. His legs went neglected.

They spent their days watching Chase and Kacie play baseball, taking them to karate, going to church. Otherwise, John sat in his chair at home.

Marci took to the Internet, reading anything that had to do with spinal cord recovery. She subscribed to magazines like PN — Paraplegia News — and scoured a regular feature called “Healing Options,” which reviewed stem cell therapies, herbal medicine, acupuncture, laser treatments.

It was there that she first read about Project Walk. ;

In search of a miracle

John was skeptical when she showed him the video clips she’d found online.

“They can do a lot these days with cameras,” he told his wife.

But with the help of John’s mother, Marci persuaded him just to visit this Project Walk place. Soon, they were on a plane.

The center sat in a nondescript business park in Carlsbad, Calif., north of San Diego. A reception area opened into two sprawling rooms filled with workout equipment, some of it specially suited for the disabled — things like a gait trainer, a machine that uses ski-like foot plates to simulate walking.

There were also Total Gyms. Step climbers. Leg cycles. Equipment that any able-bodied person might use. And trainers were constantly hoisting clients out of their wheelchairs and onto equipment.

They spoke with a man from Tennessee who was paralyzed playing football. He relocated three years earlier with his parents. He wasn’t walking — “yet,” he said — but he wasn’t about to give up.

They chatted with another man who moved from a nursing home in Montana to Carlsbad to begin the therapy in 2003. The client, Donny Clark, was paralyzed in an ATV accident, a C5-6 injury like John. Now, four years post-injury, he was taking steps in a walker, with trainers helping to move his legs.

“Are you planning on staying?” Marci asked them.

When John and Marci met with Ted Dardzinski, one of the founders of Project Walk, he warned them the process would be long — with no guarantees.

“But we’re going to do everything we can to help you get better,” he said.

Seeing had Marci believing. These clients were for real, she thought. And they were having fun. Rock music was blaring. The atmosphere was upbeat.

“This is where we need to be,” she thought, “with people like us.”

John wondered how he was supposed to use all that equipment when his body felt like cement. Even so, Project Walk seemed to him like a glimmer of light in a world that had gone dark.

The next day, John and Marci went apartment hunting.

When they returned to Iron Station, they sat the kids down and tried to make it sound like a grand adventure. California was far, true, and they’d be leaving their home, their family.

“But this is a place,” Marci explained, “that might be able to help Daddy walk again.”

A year, the couple had decided. They’d give it a year.

It was the beginning of a journey with no promise of a happy ending, no assurance that John would regain any function, much less walk out the door — like those men on the Web site.

But Marci and John were devout Roman Catholics who had clung to their faith especially tight since the accident.

God created heaven and earth in seven days. Maybe, just maybe, he could give them their miracle in a year.