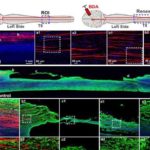 Spinal cord injuries are among the most severe and difficult-to-treat medical conditions, usually resulting in permanent disability including loss of muscle function, sensation and autonomic functions. Medical research is now on the cusp of treating severe spinal cord injuries by inducing the repair of spinal nerves, and scientists have made strides in recent years with rodents and primates.

Using chitosan loaded with neurotrophin-3 (NT3), a collaborative of Chinese medical researchers now reports the successful treatment and subsequent functional recovery of rhesus monkeys with induced acute spinal cord injuries. Though previous studies of the same treatment in rodents showed promise, these are the first results in primates, which the researchers say strongly implies its medical relevance for humans. They have published their results in The Proceedings of the National Academy of Sciences.

Chitosan is a polysaccharide derived from the chitinous shells of shrimp and other crustaceans. It has medical applications in the reduction of bleeding and as an antibacterial agent. It is also used as a drug delivery vehicle. NT3 is a neurotrophic factor that encourages the growth and differentiation of new neurons and synapses.

Spinal cord injury treatment and recovery is inhibited by a number of factors. Neurons in the central nervous system (CNS) do not easily regenerate in the best of conditions, and are further inhibited after injury by inflammatory cytokines and other factors.

Previous efforts at treatment have aimed at making the post-injury CNS environment less hostile to nerve regeneration, and although researchers made some headway with rodents, these results do not translate well to humans. The researchers wanted to translate previous results from rodent studies to the treatment of non-human primates. For ethical reasons regarding the overuse of primates in medical research, they eliminated trials of several less successful variants of the chitosan-NT3 treatment and focused only on the most successful method.

In the new study, the researchers inserted the chitosan-NT3 compound into one-centimeter gaps in hemisectioned (partially severed) thoracic spinal cords of adult rhesus monkeys. Chitosan serves as a matrix scaffold that contains and gradually releases NT3 to the injury site over a relatively long period. In the rodent studies, the NT3-chitosan scaffold inhibited inflammatory cells and attracted endogenous neural stem cells to proliferate, differentiate and eventually form neuronal networks to transmit neural signals to and from the brain.

Using a non-invasive combination of outcome measures including fMRI, magnetic diffusion tensor imaging, and kinematics walking analyses, the researchers confirmed similar results in the rhesus monkeys. They were also able to confirm that monkeys with smaller post-treatment spinal lesions had better walking behavior. This is likely due to the anti-inflammatory action of chitosan-NT3.

The authors write, “This study using nonhuman primates represents a substantial advancement in translating our initial study using rodents to human therapy.” While the study was focused on the treatment of acute injury, they believe it will also prove applicable in treatment of chronic spinal injury.

Abstract
Spinal cord injury (SCI) often leads to permanent loss of motor, sensory, and autonomic functions. We have previously shown that neurotrophin3 (NT3)-loaded chitosan biodegradable material allowed for prolonged slow release of NT3 for 14 weeks under physiological conditions. Here we report that NT3-loaded chitosan, when inserted into a 1-cm gap of hemisectioned and excised adult rhesus monkey thoracic spinal cord, elicited robust axonal regeneration. Labeling of cortical motor neurons indicated motor axons in the corticospinal tract not only entered the injury site within the biomaterial but also grew across the 1-cm-long lesion area and into the distal spinal cord. Through a combination of magnetic resonance diffusion tensor imaging, functional MRI, electrophysiology, and kinematics-based quantitative walking behavioral analyses, we demonstrated that NT3-chitosan enabled robust neural regeneration accompanied by motor and sensory functional recovery. Given that monkeys and humans share similar genetics and physiology, our method is likely translatable to human SCI repair.

Journal reference: Proceedings of the National Academy of Sciences