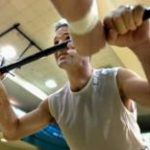 Atlanta — Duane Morrow was in a business meeting when his left foot fell asleep. He stood up and walked around. Then his right foot fell asleep.Within 15 minutes, he was lying on the floor, unable to move either leg and gasping for breath. By day’s end, he was in surgery fighting for his life.

He awoke paralyzed from the neck down, unable to move, or feel, any part of his body. A Ventilator pumped his lungs to keep him alive.

Morrow began life as a quadriplegic three years ago, the result of a ruptured disc suffered in a rugby match.

He uses a cane for balance, and an electronic device tells his toes when to lift off the ground. He has to concentrate on every step. Each motion requires as much will as strength.

But Morrow’s remarkable recovery is pushing the boundaries of what’s possible for people with traumatic spinal cord injuries.

A patient at Atlanta’s Shepherd Center, Morrow has benefited from some of the latest technology in rehabilitative medicine, such as the small wireless device that helps him walk.

He’s also the poster child for a new approach to Physical Therapy that combines rigorous athletic training with repetitive movement.

The biggest factor in Morrow’s recovery has been the patient himself, according to his caregivers.

“He’s just amazing,” said Candy Tefertiller, his Physical Therapist. “It’s important to have the right technology, but you’ve got to have a willingness to work. Every challenge is something for him to overcome.”

About to begin a therapy session on Shepherd’s basketball court, Morrow puts his toes behind the baseline and squares up like a sprinter waiting for the starter’s gun.

Josh Zottnick, his trainer, grabs a strap around Morrow’s waist to prevent him from falling and holds a stopwatch with his free hand.

Morrow grips a cane in his left hand. A Velcro band below his knee holds a small device that stimulates the leg muscles to pick up his foot when he walks.

Morrow grits his teeth and sets off in jerky motion, grunting under his breath as he moves. He crosses the court in 26 seconds.

He scowls at the result. On his third try, his time drops to 19 seconds. “I always want to get better,” he said.

After the injury, Morrow faced the very real possibility that he would never walk again. But he also resolved to push himself as hard as he knew how.

“He was just always, always overly optimistic,” said Kim, his wife. But he worried how their five children would cope.

A turning point came when Morrow asked his kids what they thought about their father living the rest of his life in a wheelchair.

The 5-year-old thought it might be cool, recalls Kim, especially if Morrow played wheelchair rugby, or “Murderball,” and knocked other guys “out of their chairs.”

The nerve cells in the spinal cord are some of the most complex and sophisticated inside the human body. They route signals from the brain, and provide crucial feedback, instantly.

But one ability eludes them: They cannot easily reproduce themselves. Unlike other cells in the body — skin, muscle, bone — spinal cells don’t regrow after injury.

That’s why spinal cord injuries can be so catastrophic. A severed spinal cord, known as a “complete” spinal injury, cannot be fused back together, and results in complete loss of feeling and movement below the break.

An “incomplete” injury, what Morrow experienced, results when the cord is damaged but not broken.

“The brain is sending signals, but they are not all getting through,” said Dr. Brock Bowman, Morrow’s doctor and the associate medical director at Shepherd. “In Duane’s case, he’s continued to improve enough that his brain has gotten more and more signals through.”

Patients suffering incomplete injuries can recover feeling, movement and function with physical therapy. But the extent of recovery is also determined by internal processes that researchers do not yet fully understand.

Some patients may regain limited sensation. Some may never progress beyond a wheelchair. A handful may, indeed, walk again — fewer than 1 percent of patients with the type of injuries that Morrow suffered, Bowman said.

“But we see those, a couple every year, where we can’t totally explain why that individual has gotten so much better than somebody else who seemingly has a very similar injury,” Bowman said.

Stepping up the pace

In the fall of 2004, a week after his surgery in Bristol, England, Morrow flew home to Atlanta and started rehabilitative therapy at the Shepherd Center. Therapists immediately put him in a wheelchair.

The goal was self-sufficiency: being able to manage the chair; to drink water from a glass; to shave and groom.

Kim said it was painful to watch her husband struggling to get a water glass to his mouth.

Morrow’s mother, Willorene, burst into tears as she watched him attempt to shave for the first time, cradling the shaver in the crook of his wrist.

“If you stepped up to help him, he would not let you,” she recalled. “He wanted to do it himself.”

After three months of therapy, Morrow was making progress. But it wasn’t fast enough. He lobbied Shepherd officials to give him more intensive therapy.

In July 2005, Shepherd began a program called Beyond Therapy, and Morrow was one of its first participants.

Instead of therapy once a week, Morrow began going three or four days a week. His workouts increased from three hours a week to 12 to 15.

Soon, he was walking with crutches; then, with canes. Eight months ago, he was fitted with a wireless device on his right leg, a $5,900 piece of equipment called the Bioness NESS L300.

Since wearing the device, Morrow has gone from being unable to lift his right foot to elevating it 12 inches.

“He’s taken it in baby steps, but very fast baby steps,” Kim said. “Every single day, it just seems like there is one new little strand of a muscle that comes alive … or gets stronger.”

After a recent therapy workout this week, Morrow said his goal is to walk without the help of a cane or the device on his leg.

“You’ve got to work,” he said, dabbing some sweat from his brow. “It ain’t easy if you want to walk again.”

4th Annual Night By The Ocean Gala to Take Place at...