It’s been just over six months since Jenny McCune became a commonality in locals’ hearts and prayers. 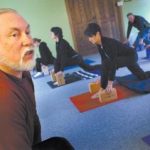 On July 5, the former Gallatin Valley Bike Club president, Team Delphine rider and long-time Bozeman resident took a corner too wide on her bicycle, crashed into a ravine and suffered a spinal-cord injury for which doctors have little understanding and no cure.

In an instant, McCune went from an elite athlete to a woman without movement below her shoulders.

It was a devastating blow to the community, and proved that the growing Bozeman area still has the small-town atmosphere, McCune’s husband, Ed Scheterlak said.

“In some ways the real story is the way the Bozeman community came together: the biking people, the people from the Zen community, those from the environmental community, people from all the gyms, everybody,” Scheterlak said. “All these people came together to help raise thousands of dollars for her medical funds and have given us tremendous support, emotionally.”

Because of this support and a determined will, McCune can now slowly type on a keyboard, use her cell phone, feed herself, dress and even walk with assistance.

This progress has come quickly, far beyond doctors’ expectations.

“She started off with a power chair,” Scheterlak said through a grin, “and now the power chair is gathering dust.”

The jolt of the accident didn’t sever McCune’s spinal cord, which would have resulted in permanent paralysis. Her spinal cord was shaken, and this brought intense bruising. However, even with a spinal cord completely intact, paralysis still set in immediately after the crash due to swelling and damage to the nerves.

She stayed in the Bozeman Deaconess intensive care unit for two weeks. When she was stable enough to be moved to the Craig Hospital in Denver, McCune could only lift her hand into a thumbs-up position.

The Craig Hospital’s primary focus is specific research and Rehabilitation of spinal and traumatic brain injuries, and this is where advancements to her mobility and morale began.

McCune began feeding herself finger foods and playing solitaire on the computer. She started therapy in a pool and got a boost of motivation from former patients who had suffered similar injuries, yet still walked out of Craig Hospital.

“I really need to push harder and be more of an advocate for myself,” McCune posted Sept. 3 on a web site (www.carepages.com) that helps connect family and friends during times of injury and illness. For example, after Labor Day holiday, I am going to push for a manual chair. Right now they have been emphasizing the motorized one because it gives me the most mobility, but it is not building up my leg muscles at all. In a nutshell, I need to become the ‘squeaky wheel.’”

She made dramatic improvements in Denver, but after her nearly two-month stay, she moved to Gainesville, Fla., to live with her cousin.

“She went to Florida because the university there has a big research center on spinal-cord injuries, and there’s nothing like that around here,” Scheterlak said.

McCune also has been given an opportunity to take part in a study that will give her top-notch attention in the most recent research.

She was chosen to become a participant in a study called ‘Lightgate,’ which is an established therapy for people with spinal injuries, Scheterlak said.

The study is based on two different techniques with a similar overall outcome: to reteach the body to walk.

The other side of the study will include a robotic exoskeleton, which will take the place of the three physical therapists.

The study is designed to help determine which theory works best in rehabilitating from a spinal injury.

“We don’t know which group she will be in,” Scheterlak said. “Either way, she’s getting training and it doesn’t cost us anything.”

McCune has made extreme advancements toward a full recovery. She jokes on one of her postings that she has become a snowbird, living in Florida during the winter months. But she has full intention to come full circle to spend the summer in Bozeman.

By that point, specialized therapists for spinal injuries won’t be necessary. She won’t need professionals dealing with spinal trauma.

At the rate she’s going, the amount of Physical Therapy she will need when she comes home is uncertain.

“Today I set a new record for walking, hopefully one that I will break in the near future — perhaps tomorrow. I walked for about an hour today although it was not continuous,” she posted Dec. 27.

“What seems almost impossible one week is fairly easy, if not downright easy, by the following week.”

Spinal-cord injury hasn’t slowed him down