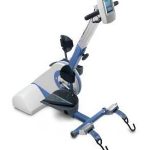 In the treatment of neurological damage, FES is used to evoke physical activity and exercise not otherwise possible for individuals with a neurological Impairment. This latest RT300 capability delivers electrical currents to stimulate nerves which activate arm muscles including the biceps, triceps, supraspinatus, Anterior and Posterior deltoids and the muscles of the forearm. This enables a patient’s paralyzed or weak arms to move through patterned physical activity utilizing their own muscles.

“FES Arm Cycling is a true world first. Physical Therapists and now Occupational Therapists are able to provide the RT300’s activity based therapy not only to impaired legs but also to impaired arms.” says John McDonald, MD, PhD, founder of Restorative Therapies, Inc., lead Neurologist to the Late Christopher Reeve, and director of the International Center for Spinal Cord Injury at the Kennedy Krieger Institute in Baltimore. 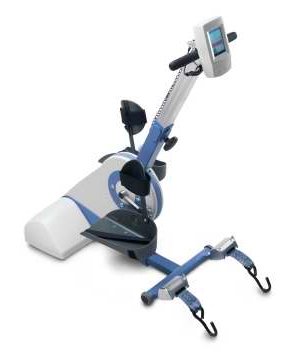 “Often after a stroke, only one side of the body is impaired; after a spinal cord injury commonly both sides are involved. FES Arm Cycling can be used to stimulate muscle groups in just one impaired arm or in both, customized to the needs of the individual.” McDonald concludes.

“This new FES for Arms capability utilizes all of the great RT300 features including dynamic Motor support, internet connectivity, self advancing smart therapy and wheel up ease of use.” says Andrew Barriskill, CEO of Restorative Therapies. “We are excited to introduce this world first therapy to a large group of patients who currently have no other physical activity options for their arms.”

FES for Arm Cycling is the latest result of Restorative Therapies commitment to ongoing development of the RT300 system; it is the third FDA clearance for the RT300 system during 2007.

Restorative Therapies is a privately-held company headquartered in Baltimore, Md., whose mission is to help people with neurological impairment achieve their full recovery potential. Restorative Therapies is one of the first companies to target activity-based therapy and FES as a treatment for immobility associated with paralysis such as stroke, Multiple Sclerosis and spinal cord injury.