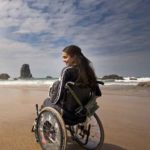 For many individuals with spinal cord injury, restoring autonomic functions – such as blood pressure control, bowel, bladder and sexual function – is of a higher priority than walking again.

Paralysis (loss of muscle function) is the most visible consequence of a spinal cord injury. Historically, there have been few significant advances in the treatment of such paralysis in individuals with long-term injuries.

Electrical stimulation of the spinal cord — through the techniques of neuromodulation or neurostimulation — is now beginning to show real world promise. Two case series published towards the end of 2018 in the journals Nature and New England Journal of Medicine demonstrated that neuromodulation, coupled with intensive physical therapy, allowed participants to start walking again.

One of the most common neuromodulation approaches — epidural spinal cord stimulation — has been investigated over the past four decades and was originally developed to treat chronic pain.

Briefly, a tiny panel of electrodes are implanted into the epidural space on top of the dura (the protective layer that encases the spinal cord) and are connected to a wireless electrical pulse generator. Electrical impulses are delivered to precise parts of the spinal cord.

Work from our laboratory has pioneered a growing body of evidence that epidural spinal cord stimulation can safely and effectively restore crucial autonomic functions — such as blood pressure control and bowel function — as well as improving exercise capacity — for patients with spinal cord injury.

Walking-focused research has received a considerable amount of mainstream media attention. The hype may be driven by the general public’s perception that the ability to walk again would be the No. 1 priority for individuals with a spinal cord injury.

However, survey information collected from individuals with spinal cord injury suggests certain autonomic functions (blood pressure control, bowel, bladder and sexual function) are of a higher priority for their everyday quality of life than the ability to walk again.

Non-disabled individuals often take these functions for granted, as they are autonomous (without conscious thought or effort). Individuals with spinal cord injury commonly experience numerous invisible conditions that can have a profound impact on everyday life.

Loss of bladder and bowel functions

For example, orthostatic hypotension (a drop in blood pressure) can occur when changing position, such as sitting up, which is often accompanied by dizziness, blurred vision, nausea, confusion and loss of consciousness. Orthostatic hypotension can also have long-term detrimental health consequences, including an increased risk of dementia and stroke.

The problem with using medication to manage orthostatic hypotension is that it takes too long to take effect. It then lasts longer than is necessary for such rapid changes in blood pressure.

Low blood pressure and altered autonomic cardiovascular regulation can also impair an individual’s response to exercise. For example, the volume of blood being pumped by the heart and thus the ability to transport oxygen to working muscles is reduced, leading to premature fatigue and a lower exercise capacity.

Individuals with spinal cord injury also experience impaired or even complete loss of bladder, bowel and sexual function. Most are unable to empty their bladder (requiring catheterization) or initiate bowel movement and also experience urinary and fecal incontinence.

Many men have erection and/or ejaculation difficulties and both sexes may be unable to experience an orgasm.

Restoring the capacity for orgasm

Second, we have shown that epidural spinal cord stimulation is capable of improving upper-body exercise capacity by 15 to 26 per cent. This is equivalent to weeks or months of aerobic exercise training.

Furthermore, we have shown that epidural spinal cord stimulation significantly reduced the time needed for bowel management, compared to a conventional bowel routine, by more than half (26 versus 58 min).

We believe this improvement is a result of enhanced contractions of abdominal muscles, which in turn increases the pressure in the abdomen and promotes bowel evacuation. We also showed that epidural spinal cord stimulation can affect bladder function. Other researchers have demonstrated a restoration of voluntary voiding.

Recent work has also demonstrated the return of the ability to experience orgasm in one woman with a five-year spinal cord injury.

While this research is promising, it is worth emphasizing that the majority of these findings have only been shown in a small number of participants.

A considerable amount of work is still required to understand how to use this technology to optimize each autonomic function and whether specific injury characteristics are best suited for this therapy. Additionally, the implantation of electrodes requires an invasive operation, which is not without risk, and may also be cost prohibitive for some individuals.

Fortunately, researchers are also beginning to make advances with non-invasive spinal cord stimulation approaches. The placement of electrodes on the skin (transcutaneous) at certain locations over the spinal cord has also showed improvements in blood pressure control, bladder function and hand function.

This less invasive approach is currently being commercialized and could be widely available in a matter of years, assuming larger scale clinical trials confirm benefits and safety.

Findings suggest that these exciting technologies have the potential to significantly improve quality of life in individuals with spinal cord injury.

This article is republished from The Conversation under a Creative Commons license. Read the original article.