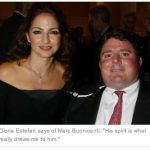 Estefan escaped from a near-fatal bus accident in 1990 with a broken back. After months of grueling Physical Therapy and surgery, she returned to the stage and studio, winning Grammy Awards and numerous other accolades.

Buoniconti wasn’t so lucky. In 1985, he was hoping to follow in the footsteps of his father, NFL Hall of Fame linebacker Nick Buoniconti, when his life was changed.

“I made a tackle,” Marc Buoniconti said, “and the next thing I know, I fell to the turf like a ton of bricks. … I knew right away that I was paralyzed.”

Buoniconti’s neck had been broken and his spinal cord severed — leaving him a quadriplegic. He was given no hope of walking again.

For the Buoniconti family, the grim prognosis was a call to battle. With the help of Dr. Barth Green, a top spinal cord injury specialist in their hometown of Miami, Florida, they vowed to do everything in their power “to raise money and awareness to … find a cure,” Marc Buoniconti said.

With the help of Estefan and others, the project has become the world’s largest, most comprehensive research center dedicated to finding a cure for spinal cord injuries and a model for other institutions developing centers for spinal cord injury research, according to its Web site.

Estefan serves on the board of directors of The Buoniconti Fund to Cure Paralysis, the national fundraising arm of The Miami Project, and as chairperson for a capital campaign that raised $40 million to build the Lois Pope LIFE Center at the University of Miami — Estefan’s alma mater. The center, which opened in 2000, is home to The Miami Project.

“Having experienced paralysis firsthand … I feel especially fortunate to have had a positive outcome despite a very negative prognosis,” Estefan said in making the gift, according to the project’s Web site. VideoWatch Estefan and Marc Buoniconti discuss the project »

“I vowed that I would do whatever was in my power to assist those already on their way to finding a cure. I urge anyone that is in a position to help, to join us in taking on this challenge knowing that we are closer than ever to a cure and to helping those that live in wheelchairs get on their feet.”

It is estimated that 2.5 million people worldwide are paralyzed because of spinal cord injury, with thousands of new cases occurring each year, according to the International Campaign for Cures of Spinal Cord Injury Paralysis.

For Buoniconti, the first year after his injury was a battle to liberate himself from a respirator and breathe on his own. Then he had to adapt to a breath-controlled wheelchair that would give him mobility.

Buoniconti, 41, never lost hope, and continued to fight for his own Rehabilitation and those of thousands of others through his work as the official ambassador for The Miami Project.

“I interact with patients and doctors and donors … putting together events … and making those important phone calls,” he said. “There’s not a week that goes by that I don’t hear from families of … someone who’s been paralyzed … and they have nowhere to turn except for The Miami Project.”

His determination to find a cure has made him a hero in Estefan’s eyes.

“His spirit is what really draws me to him because he has a purpose. He gets up every day and works hard,” she said, “and he doesn’t allow anything negative to bring him down.”

According to The Miami Project, Buoniconti’s efforts have helped raise more than $250 million.

“I think we are going to see a cure thanks to the efforts … of Marc and his family,” Estefan said. Marc “took the bull by the horns and he really has made a difference.”