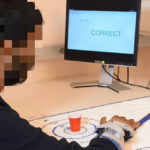 What if paralyzed limbs could move using only the power of one’s thoughts? Borrowing a story line from the realm of science fiction, a team of researchers at The Miami Project to Cure Paralysis—together with neurosurgeons and biomedical engineers from the University of Miami Miller School of Medicine—are using a brain-machine interface to make this once seemingly impossible feat a reality for victims of spinal cord injury (SCI). Seeking innovative ways to restore function after SCI is one of the central goals for The Miami Project, which was founded in 1985 and has grown to become one of the “crown jewels” of the Miller School of Medicine—and a model for other institutions developing centers for SCI research. On November 30, 2018, neurosurgeon Jonathan R. Jagid, M.D., associate professor, neurological surgery, and Abhishek Prasad, Ph.D., assistant professor, biomedical engineering, led a surgical procedure in which an investigational system was implanted on the brain of a research participant. The 22-year-old man, who suffered a SCI to his C5 vertebrae as a result of a motor vehicle accident several years earlier, is an ASIA A complete quadriplegic—meaning he has no movement or sensation below the biceps and elbow—and in need of around-the-clock nursing care for all aspects of daily living. Because the spinal cord carries information from the brain to the muscles that control the body, people with SCIs in their high cervical area are often left with the inability to use their hands or limbs. Remarkably, however—despite the fact that their brain signals no longer reach their target muscles—the cells in the brain still respond when a person even thinks about moving their hand.

For SCI researchers, though, the challenge has been trying to read those signals from the brain and bypass the injured spinal cord to achieve movement of a patient’s arms or legs. In the 1970s, Jacques Vidal, Ph.D., professor emeritus, computer science at UCLA, coined the term “brain-computer interface” as he began exploring ways brainwaves could be used to control external devices. Research into human-machine interaction has exploded over the past few decades, as scientists from around the world look at ways to use non-invasive and permanently implanted sensors to record brain activity and control everything from screen cursors to robotic arms. At the Miller School of Medicine, Dr. Jagid worked with Michael Ivan, M.D., assistant professor of neurological surgery and an expert in brain mapping, to stimulate different areas of the brain to identify the precise area which controls the research participant’s dominant right hand. Dr. Jagid and his team then implanted the device on that particular part of his brain. Following the surgery, the team spent weeks using a sophisticated program to “train” the computer to understand when thoughts of hand movement were observed in the electrical activity from the research participant’s brain. Within milliseconds of a signal being detected, special algorithms determine whether he is thinking about moving his hand. Electrical signals are then sent to an external orthosis that stimulates the research participant’s hand muscles and causes them to open or close, much the same way that his body did before injury. With the brain-machine interface, Dr. Jagid said, the research participant is now able to successfully pick up and transport objects with his right hand. “What is unique here is that nobody before has used this particular fully implanted device in an attempt to have a SCI patient achieve some restoration of function that can be used in a meaningful way outside of the lab setting,” Dr. Jagid said. “Other devices that have achieved similar results require the person to have an implanted post protruding from the head and be tethered to a computer in a lab.”

Dr. Jagid and his team hope that, in the not too distant future as technologies such as this evolve, the effect of a devastating SCI can be minimized, giving patients the ability to live more independently. Joining Drs. Jagid and Prasad for this clinical trial are Iahn Cajigas, M.D., Ph.D., neurosurgery resident, Department of Neurological Surgery; Noeline Prins, Ph.D., postdoctoral research associate, Department of Biomedical Engineering; Michael Ivan, M.D., M.B.S., neurosurgeon, Department of Neurological Surgery; Sebastian Gallo and Jasim Ahmad, undergraduate researchers, Department of Biomedical Engineering; Letitia Fisher, research coordinator; Anne Palermo, physical therapist; and Audrey Wilson, research associate. In their pre-clinical study published in 2018(1), Dr. Prasad’s team compared the feasibility of decoding movement information from the scalp of healthy control and comparing that to patients who had suffered a cervical SCI. They found that, despite the damage to the spinal cord, the brain signals of both healthy subjects and SCI participants as recorded from the surface of the scalp contained sufficient information to determine with high accuracy when they wanted to initiate movement. Now, with sensors sitting on the surface of the brain, the decreased noise on the recorded brain signals is already leading to improved decoding results. 1. Gant, K., Guerra, S., Zimmerman, L., Parks, B., Prins, N., & Prasad, A. (2018). EEG-controlled functional electrical stimulation for hand opening and closing in chronic complete cervical spinal cord injury. Biomedical Physics & Engineering Express, 4(6), 065005. doi:10.1088/2057-1976/aabb13 The Miami Project, University of Miami

Catastrophic health insurance: can you pay the price?