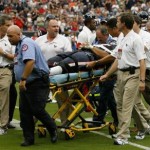 Heading into week four and putting a quarter of the regular season in the books for most teams, there have two major neck injuries in the NFL.

“It was an unfortunate situation in Buffalo,” Houston coach Gary Kubiak said. “It was so difficult to deal with. For a moment there we were staring at a very difficult situation ourselves. We are just fortunate that our man came out OK.”

While Killings left the hospital on Friday and and is walking again, Everett has a more difficult Rehabilitation period.

We take a look at the art of the tackle, special-teams play, the emotional toll and what can be done to prevent these injuries.

In Buffalo, the players are selling T-shirts on the team’s Web site that were made to honor Everett. Many of them wear the shirts on game days.

The proceeds from the $20 T-shirts will go to spinal-cord research. The team has also collected 23,047 e-mail messages for Everett and have passed them on to his mother.

In Houston, Kubiak rushed to the hospital after the game with the Colts.

“He was moving everything, Kubiak said. “He talked to me real good. He was very upbeat. He was on his feet as of Monday.

“As of Monday afternoon he was actually on his feet walking around. We [were expecting] him to be released from the hospital sometime Friday and be walking around our building again. So we’re very fortunate.”

Players don’t like to talk about the dangers of the game, but when a player has to be carted off the field on boards, that gives even them reason to reflect.

“Obviously, to lose one of your players, especially the way that it happened, it’s one of things where you take a step back and pray for the best and hope that he’s doing all right,” said Houston defensive end Mario Williams. “There is nothing else that we can do at that point in time. We can just pray for the best and hope that everything is all right.”

With players getting bigger, stronger and faster, the collisions on special teams can be especially violent.

On kickoff coverage, the players get a running start of at least 50 yards and maybe as much as 60, depending on the kick. The wedge busters hurl themselves into the blocking formation to break it up. 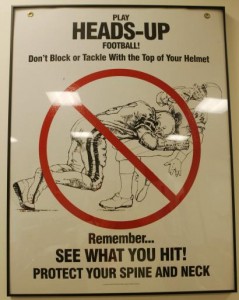 Everett and Killings were injured trying to make tackles on kickoff returns.

“These collisions that we have on the football field week in and week out, it’s a very, very physical sport,” Kubiak said. “I don’t know what the answer is, but boy you sure hate to see those things happen. When they do you just cross your fingers.”

Falcons defensive back Antoine Harris is a wedge-buster.

“There are a lot of hazards running down there into the wedge,” Harris said.

But he doesn’t think about the perils of the job.

“It’s kind of a rare thing [a neck injury],” Harris said. “It’s not something that happens a lot. When it does, it’s devastating. You just have to go down and make a play.”

The art of the tackle

Ron Courson, the University of Georgia’s director of sports medicine, is an advocate of heads-up tackling.

“The most common mechanism for catastrophic neck injuries is contact to the top of the head,” Courson said. “This is something that has been shown through research.”

He was more graphic about how the neck is fractured.

“If you are running at a high rate of speed and you bury your head into somebody’s chest or head, there is a sharp acceleration and your head stops because it hits an object, but your body keeps going and crushes your neck between your head and body,” Courson said. “Your spinal cord is inside the spinal column. But if you have a multiple column break you have the potential for paralysis.”

The key to stop these types of injuries is proper tackling techniques.

“What we try to emphasis is heads-up play,” Courson said. “You should see what you hit.”

Alex Lincoln, a former player at Auburn and with the San Francisco 49ers, is the director of athletic performance for the Andrews Institute for Orthopaedics and Sports Medicine in Gulf Breeze, Fla.

He works with renowned sports surgeon James Andrews, and he works to get word out about proper tackling.

“Not only to get the word out to the elite athlete in college and professional sports, but also to the youth athletes who we feel have the least amount of this education on the prevention of these injuries,” Lincoln said.

The Andrews Institute, partnered with the National Athletic Trainers Association to produce and distribute a DVD call “Heads Up” to teach proper tackling techniques.

Tony Dungy, coach of the Indianapolis Colts, and Grant Teaff, who is executive director of the American Football Coaches Assocation and a former coach at Baylor University, appear in the DVD that’s narrated by Jerry Punch of ESPN/ABC. The video can also be viewed at www.theandrewsinstitute.com.