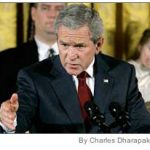 It is the third veto of his presidency and the second involving embryonic stem cell research.

Bush said he supports science, but also believes that “all human life is sacred.”

“If this legislation became law, it would compel American taxpayers for the first time in our history to support the deliberate destruction of human embryos,” Bush told a gathering of supporters at the White House shortly after vetoing the measure. “I made it clear to Congress and to the American people that I would not allow our nation to cross this moral line.”

Bush said those alternatives can allow Americans to “advance science and at the same time uphold our moral values.”

“Destroying human life in the hopes of saving life is not ethical,” Bush said. “And it is not the only option before us.”

Opponents of the latest bill insisted that the use of embryonic stem cells was the wrong approach on moral grounds — and possibly not even the most promising one scientifically. These opponents cite breakthroughs involving medical research conducted with adult stem cells, umbilical cord blood and amniotic fluid, none of which involve the destruction of a human embryo.

In his executive order the president made federal funding available for research on additional “pluripotent” stem cells — ones that can give rise to any kind of cell in the body except those required to develop a fetus.

“There’s a lot of interesting work going on that is ethical and moral,” Bush said.

The National Institutes of Health says these stem cells offer the prospect of having a renewable source of replacement cells and tissues to treat Parkinson’s and Alzheimer’s diseases, spinal cord injury, stroke, burns, heart disease, diabetes, osteoarthritis and rheumatoid arthritis and other conditions.

Democrats had made passage of the stem cell research bill a high priority when they took over Congress in January, but do not have enough votes to override a veto.

Senate Majority Leader Harry Reid, D-Nev., in calling for Bush to sign the bill, said it acknowledges the ethical issues at stake and offers even stronger research guidelines than exist under the president’s current policy.

“This is just one example of how the president puts ideology before science, politics before the needs of our families, just one more example of how out of touch with reality he and his party have become,” Sen. Hillary Rodham Clinton, D-N.Y., told the Take Back America conference of liberal activists Wednesday.

Scientists were first able to conduct research with embryonic stem cells in 1998, the NIH says. There were no federal funds for the work until Bush announced on Aug. 9, 2001, that his administration would make the funds available for lines of cells that already were in existence.

Currently, states and private organizations are permitted to fund embryonic stem cell research, but federal support is limited to cells that existed as of Aug. 9, 2001. The latest bill is aimed at lifting that restriction.

In his first veto, Bush rejected legislation passed by Republican-led Congress to allow funding of additional lines of embryonic stem cells. Bush’s second veto rejected a military funding bill that would have set timetables for U.S. troop withdrawals from Iraq.

“By vetoing a bill that expands stem cell research, the president will say ‘no’ to the more than 70% of Americans who support it, ‘no’ to our Democratic Congress’ fight for progress, and ‘no’ to saving lives and to potential cures for diseases such as diabetes and Parkinson’s,” Pelosi wrote. “He will say ‘no’ to hope.”

Researchers ask: Is China the sleeping giant of biotech?