Paralyzed man lashes out at Pacman 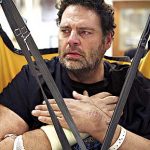 No luck. The pain just shifts.

Urbanski, paralyzed from an inch above his belly button on down, was shot at least three times Feb. 19 at a Las Vegas strip club during the NBA All-Star weekend.

The pre-dawn shooting followed a scuffle involving Tennessee Titans cornerback Adam “Pacman” Jones and a security guard inside the club. Las Vegas police have recommended felony and misdemeanor charges against Jones for inciting the fight that police say led to the triple shooting. The identity of the shooter remains a mystery, and prosecutors want to hold off on filing charges until more details emerge.

Jones, who has been questioned by police in nine other incidents since being drafted two years ago, has been suspended for the 2007 season for violating the NFL’s personal conduct policy.

He’s appealing the suspension and recently took out a full-page ad in a Nashville, Tenn., paper that said, “Learning that I would be suspended from the NFL was one of the worst moments of my life.”

“That’s the worst moment in his life?” Urbanski asked. “Try being put in a wheelchair for the rest of your life. This changes everything.”

Now, Urbanski spends his time navigating his chair down the hallways of Craig Hospital, a Denver facility that specializes in spinal cord and traumatic brain injuries. The 6-foot-6, 390-pound former professional wrestler attends three to four Physical Therapy classes a day, learning how to get in and out of his chair, dress himself and put toothpaste on his toothbrush. All are still struggles as he regains strength in his arms.

Some days, the 44-year-old just can’t get out of bed – the pain is too intense. Even so, he’s grateful.

“There are people worse off than me,” Urbanski said.

He tries to remain upbeat for his wife, Kathy, who’s almost always nearby, even sleeping by his side on a fold-out couch. And for his father, Don, who came up from Florida to help.

After three weeks in a medically induced coma, lung and rib infections, bowel and bladder complications, pneumonia, multiple operations on his wrists and the removal of his spleen, progress has been slow.

“I make a step forward and then take two steps back,” said Urbanski, who has a 9 mm bullet permanently lodged in his spine.

Utley was paralyzed Nov. 17, 1991, in an NFL game and gave a memorable “thumbs up” gesture as he was wheeled off the field. Now he reaches out to spinal-cord patients to give them hope.

“This injury has never changed who I am, who I was or who I want to be,” Utley said. “I want out of this wheelchair real bad. But it will never stop me.”

Recently, Urbanski’s kidneys temporarily shut down, causing him to gain 57 pounds in water weight and his legs to swell to nearly three times their normal size. He’s wearing size 17 shoes just so he can squeeze in his feet. He frequently stops in mid-sentence as a jolt of pain overwhelms him.

“A good day for me? Physically, I haven’t had one,” said Urbanski, who couldn’t get out of bed Wednesday due to intense headaches he ranked at 20 on a 1-to-10 scale. “Mentally, looking over and seeing my wife by my side is always a good day. But the pain – it doesn’t stop.”

It all began in the early morning hours of Feb. 19.

Urbanski, who worked as a real estate broker during the day, was working at the Minxx strip club as a manager to earn extra income to send his wife to law school.

He arrived at the club at 4:45 a.m., entered through the back door, clocked in, grabbed a portable radio and was told there was a problem in the dancers’ dressing room.

After breaking up the dispute, another employee asked Urbanski to keep an eye on the front door. As he stepped outside the club, he remembers seeing a muzzle flash out of his left eye and then crumbling to the ground.

“I didn’t even feel the pain of the bullets,” Urbanski said. “I didn’t feel anything.”

As Las Vegas police work to fill in the gaps, the Urbanskis are upset over what they consider a lack of progress.

“We’re taking it very seriously,” said Lt. George Castro, leader of the Las Vegas Police Department’s violent crimes unit. “We are still working on and looking at everything that comes in. We’ve never closed our doors or said enough’s enough.”

According to a Las Vegas police search warrant, Jones was showering dancers on stage with thousands of dollar bills. Minxx strip club co-owner Robert Susnar has said the shooting happened after Jones threatened to kill a bouncer, whom the club owner said intervened when Jones allegedly attacked a dancer after she grabbed money on the stage.

Jones’ attorney, Manny Arora, didn’t respond to a phone call or an e-mail.

“Did it (throwing the money) incite them in a violent fashion or in excitement? We don’t know,” Castro said. “But when you call fire in a building, you’re still liable if someone gets hurt. There’s a certain amount of responsibility.”

Meanwhile, Urbanski’s wife is busy trying to get their life in order for when they return to Las Vegas in late July. On this day, she was on the phone, feuding with a worker’s compensation company that wouldn’t approve a bigger, more wheelchair-friendly bedroom.

“My moods are determined by his pain,” said Kathy, who’ll leave June 20 to return to her job teaching third-graders at a Las Vegas public school and will fly back on weekends. “Everyone in (the hospital) would rather be in that chair than their loved ones.”

“In a heartbeat,” said Don Urbanski, who has a hospital-issued apartment a short walk and an elevator ride from his son.

When asked how difficult this has been, watching his son adjust to his traumatic injuries, Don Urbanski put his hands over his face and sobbed.

His son stays focused on the small triumphs – playing the guitar or cooking balsamic chicken and wild rice for his family and the Craig Hospital staff.

It’s those glimpses of his former life that uplift, and devastate, Urbanski.

Take an upcoming Harley Davidson fundraiser on June 3, when dealerships in New York and Las Vegas will raise money for Urbanski’s care. Though appreciative, he wishes he were riding his motorcycle with them.

“I was always on my bike,” he said, staring at his hands. “It’s so nice that so many people care.”

Bring up his professional wrestling days, and his eyes light up. Known as the “Mad Russian” and the “Polish Prince,” he wrestled World Wrestling Federation stars such as Hulk Hogan, Sergeant Slaughter and Junkyard Dog. He fought mostly in smaller venues, but had a couple of WWF television appearances.

“I was usually the bad guy,” Urbanski said with a laugh. “It was fun being the bad guy.”

Now, that role’s being played by others who have yet to be identified in the shooting.

“I didn’t know these scumbags,” Urbanski said. “The guy could’ve walked up and put one between my eyes and I would’ve been done.

“I’m alive. When you come to think of it like that, I got off easy.”