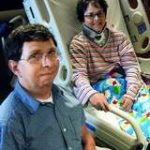 Puckett, now 57, who was left a quadriplegic after a drunk hit the car in which she was riding in 1967, is recuperating from delicate spinal surgery to save her remaining arm and wrist movement.

In my column several weeks ago, in which she discussed her difficult choice between risking the surgery or possibly losing the use of her arms without surgery, she remembered the last time she was at Frazier Rehab after learning that she would never walk again.

In one of her lowest moments 40 years ago, a 7-year old fellow patient she knew only as Freddy had rolled his wheelchair into her room to admire a stuffed animal that someone had brought her.

Freddy had suffered juvenile rheumatoid arthritis since age 2. “It broke my heart that he was already in a wheelchair,” Puckett said. But his cheerful attitude left her with a new perspective on her own condition. Puckett, a 16-year old former cheerleader, considered all that she had experienced that Freddy might never have a chance to enjoy. His visit helped her find the determination to make the best of her bad situation.

She went on to become a reporter and newspaper editor and now is director of community relations for the Shelby County school system.

Freddy’s mother, who saw the column about Puckett and her reference to “the little boy named Freddy,” passed the article along to her son, Fred Otto, and his wife, Kathy, who live in eastern Louisville. Otto, who earned an English degree from the University of Louisville, has been a researcher with American Printing House for the Blind in Louisville for 20 years.

Puckett chose to undergo the surgery, and it was Fred Otto, 47, who rolled into Puckett’s room at Frazier Rehab for his second visit in 40 years.

It was a fine reunion.

Otto, who was born in Michigan, confessed that he had only a dim memory of “a girl with long hair who talked with a Southern accent,” but Puckett described his visit in detail as the two remembered Frazier 40 years ago.

After nearly 14 hours of surgery, Puckett learned that it was successful.

During their visit, Otto and Puckett compared wheelchairs — his a push model and hers a motorized one. The day will come, Otto said, when he will need a motorized chair, but he prefers the push model while he is still able to maneuver it. He has actually mowed his lawn with a push mower several times, nudging the mower along mostly with his chest a few inches at a time while rolling the chair.

He fantasizes about playing second base and dunking a basketball. He bought a violin but must hold it upright in order to move his fingers across the strings.

“It sounds awful, but the experience of playing it … is a great feeling,” he said.

The conversation skipped from humor to quiet reminiscence to discussion about families and careers. There was a moment for medical updates. Feeling the need to again provide inspiration and encouragement for Puckett, but not knowing quite how, Otto spontaneously broke into a few bars of, “When you walk through a storm …,” which was drowned out by Puckett’s laughter.

His visit had worked again, she told him. The next day she was released to go home for a month of recuperation before she will return for more therapy.

“I don’t pretend to know what karma means,” Otto said. “But I believe that there is something at work there that brings us together and weaves us in and out of each other’s lives.”

So it was with a 7-year old boy and a 16-year old girl at Frazier Rehab in 1967 — and again last week for the same two people. Otto promised to write about the visit on his and his wife’s Web site: www.fredkate.libsyn.com.

Byron Crawford’s column appears on Sundays, Wednesdays and Fridays. Reach him at (502) 582-4791 or bcrawford@courier-journal.com. Comment on this column, and read previous columns, at www.courier-journal.com/byron.