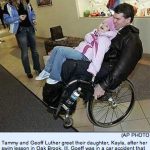 In the weeks following the car accident that left him paralyzed below the waist, Geoff Luther was haunted by worries that he’d lost the chance to be a father.

“It was some of the stuff I was thinking about the most,” said Luther. “What about having children? What about getting married? Can you naturally conceive a family?”

His questions are shared by thousands of young men each year who suffer paralyzing spinal injuries. But many may give up hope — or undergo unnecessary, invasive procedures — because their doctors don’t know about simple ways to help them.

Geoff was 28 years old and working for his father’s tool and dye company in Milwaukee in 1991 when his car rolled over on the icy road after a deer hunting trip. After the accident, he grew closer to a woman he had met while both were dating other people. Tammy Russell, who thought Geoff was “arrogant” before the accident, found herself drawn to a man who had changed physically and emotionally.

She fell in love and in 1993 married the man who showed her a determined spirit and a growing ability to appreciate life.

Doctors at the Rehabilitation Institute of Chicago told Geoff, 43, that most men with spinal cord injuries can father children. But the treatments that allowed him and Tammy, 39, to conceive aren’t offered to many injured men.

Instead some fertility doctors jump immediately to expensive, invasive procedures, such as surgically extracting sperm from the testes, when confronted by a man in a wheelchair.

The Luthers, who live in Oak Brook, Ill., avoided that procedure. Nonetheless, it took six years and, they acknowledge frankly, tens of thousands of dollars, some contributed by his father, before they succeeded. But after a tour through most of the methods and procedures of rehab fertility medicine, the Luthers conceived their son, Trent, now 6, and daughter Kayla, now 3.

“We went through it all,” Tammy said.

Their story illustrates how determined couples can conceive with guidance from medical professionals who are well versed in techniques that work for paralyzed men.

What helped in Geoff’s case was a device that triggers ejaculation with a low-voltage impulse of electricity, a procedure borrowed from animal husbandry and developed for use in humans by Dr. Carol J. Bennett and her colleagues at the University of Michigan’s urology department.

Geoff remembers asking his doctor: “How will you know when you have it turned up high enough? Will my ears start smoking or what?”

The low-voltage impulse worked for Geoff, but his sperm quality was low. So, a single sperm was injected into one of Tammy’s eggs to create an embryo. That embryo was implanted in the womb and Trent was conceived. A few years later, Kayla was conceived the same way.

“I loved being pregnant,” Tammy said.

Nancy Brackett, a researcher at the Miami Project to Cure Paralysis, surveyed more than 100 fertility centers and discovered that 28 percent don’t offer two simple techniques that rehab experts have used successfully for years and that work for 95 percent of Paraplegic and quadriplegic men. Brackett published her findings in the October issue of Fertility and Sterility, a journal read by reproductive medicine doctors, and now she has made the issue her soapbox.

Paul and Shelly LeVasseur of Winfield, Ill., felt lucky they could conceive at home.

Brackett wants doctors to try simple solutions before assuming they must use surgical means to retrieve sperm from the testes of injured men. In Brackett’s survey, some doctors said they lacked training or equipment, or were unfamiliar with the methods.

“If we forget these simple things, it’s almost like going backward,” Brackett said. “It does a disservice to these patients.”

Miami Project researchers are studying compounds in the semen of injured men that have a poisonous effect on sperm. The research could lead to a drug that would counteract the effect, Brackett said.

Of the 11,000 spinal cord injuries annually in the United States, 80 percent are among men between the ages of 16 and 45 — the prime reproductive years.

Rehabilitation Institute nurse practitioner Diane Rowles, who teaches a class called Sexuality and Fertility to patients, said sex is “a very private topic, a very personal topic.” But if medical staff members don’t educate spine injury patients about sex and fertility, they may assume the worst: that they’re not able to have a sex life or father children.

“It’s a big thing. You just can’t leave it out,” Rowles said. “They need to learn about it, too.”

The Luthers’ children haven’t asked where babies come from. Tammy said someday, if they ask, she’ll tell them about many different ways children come into the world, from adoption to reproduction with medical help.

Geoff said he doesn’t know what he would say. “I still haven’t had that talk with my mom and dad, so I’m not sure,” he said.

For men with spinal cord injuries who want to be fathers, Geoff offers this advice: “Search out the best doctors, or you can waste a lot of time and resources.”

Ray of hope for patients with spinal cord injury