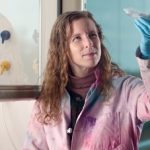 Newswise — Researchers are developing scaffoldlike materials designed to be injected into the body where they will quickly solidify to fit any space, repairing damaged bones, spinal cords, arteries and other tissues.

Because the material starts out as a liquid, it fills in the gaps between damaged or missing tissue before hardening into a gel, or “three-dimensional matrix” that eventually disintegrates as it is replaced by healthy tissue, said Alyssa Panitch, an associate professor in Purdue University’s Weldon School of Biomedical Engineering.

This gel could be loaded with time-released therapeutic drugs, such as “growth factors” needed to enhance healing. The approach also could be used to improve “drug-eluting stents,” which are metal scaffolds inserted into arteries to keep them open after surgeries to treat clogs. Once in place, the stents release therapeutic agents, but scientists have recently learned that the stents can cause new clogs, leading to heart attacks.

New findings about the matrix materials were detailed in a research paper presented Monday (March 26) during the American Chemical Society’s 233rd National Meeting & Exposition, which is taking place through Thursday (March 29) in Chicago. The paper was written by Panitch; Brandon Seal, a former doctoral student working with her at Arizona State University where Panitch began this work before coming to Purdue; Arizona State graduate student Karen Chao Butterfield; and John Chaput, an assistant professor of chemistry and biochemistry at Arizona State. 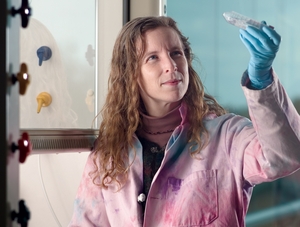 The method harnesses natural interactions in the body between molecules called polysaccharides and protein building blocks called peptides to control the assembly of the three-dimensional matrices. The polysaccharides interact with proteins and help the proteins come together and assemble scaffolds. Researchers have used the interaction between a polysaccharide called heparin and a peptide fragment of a protein called antithrombin III, which is contained in the bloodstream to control clotting.

“But we could have chosen peptides from many other proteins instead of antithrombin III and also different polysaccharides to tailor our matrix for specific applications,” Panitch said.

The proteins exist in the “extracellular matrix” located between cells in tissues, where cells secrete the protein molecules. The researchers attached heparin-binding peptides from antithrombin III to a synthetic material called polyethylene glycol.

“It’s very rapid assembly,” said Panitch, who specializes in regenerative medicine. “The matrix can have any shape you want it to. If you had a defect in the bone, you could inject it into the defect. It would solidify immediately to fill the defect and release bone morphogenic proteins to enhance healing.”

The technology could have several future applications, including controlled release of drugs and growth factors, which are used in wound healing, bone Regeneration and other medical applications. Growth factors control cell behavior and are used to help bone grafts integrate with surrounding bone tissue. Controlling how strongly they bind to polysaccharides could enable researchers to develop gels that, when injected, would release therapeutic peptides over months, weeks, days or hours, depending on the application.

“We control how strongly it binds to the heparin, and changing the binding strength changes how long it takes to release therapeutic proteins encapsulated in the gel,” she said. “The stronger it binds, the more slowly the therapeutic drugs are released.”

The gels are “thermally reversible,” which means heating them turns them back into a liquid.

“You can cool them down and they become solid, a characteristic that could be important for controlled release for drug therapy,” Panitch said. “If you wanted to locally heat up the tissue to make the release faster, you could do that.”

Future research may include work to increase the gels’ strength. The researchers have shown how the gels are strengthened by using polymers that have more “Functional groups.” These functional groups are segments that attach to other molecules to fortify the matrix by forming “crosslinks” from one molecule to the next.

The research has shown that this crosslinking can be used to strengthen the matrix about 10 times, and the engineers have increased the original strength of the material, which could be likened to the consistency of mayonnaise or Jell-O, to something closer to the strength of cartilage or the material used to make contact lenses.

“The key is strengthening it as much as you want but still having that instantaneous assembly that was based on the polysaccharide-protein interaction,” Panitch said. “That’s what we’ve been able to do. We’ve been able to get essentially an instantaneous assembly and increase the strength of the material and still be able to control the release of therapeutic agents.”

The gels also could be designed to possess an “enzymatic digestion domain,” where enzymes could attach, causing them to degrade slowly and leaving behind only newly grown tissue to replace the damaged areas.

Synthetic polymers are currently used in medicine, including for sutures that degrade over time and wound-repair dressings. But using peptides derived from natural proteins promises further advances in the field of tissue engineering because the researchers can tweak the materials by changing the sequence of amino acids in matrix peptides, Panitch said.

Such scaffolds might be used to repair damaged arteries by mimicking the natural matrices that surround smooth muscle cells in vessel walls.

One application likely to emerge over the next decade is a material to treat spinal cord injuries, Panitch said.

“It is thought that most of the damage caused in spinal cord injury is not caused by the initial injury but by the inflammation that occurs later,” she said. “So, if you could inject this gel with a therapeutic agent that inhibits inflammation while secreting growth factors within several hours of injury, that could potentially be very useful.”

New matrix materials also have likely applications in other “drug-eluting” materials that release therapeutic agents inside the body, including a type of stent used to keep arteries open after surgeries. Doctors now implant stents in the hearts of patients after using a procedure to treat blocked arteries called balloon angioplasty. The procedure involves inserting tiny balloons to push open the clogged arteries. In some cases, the artery closes up again within a few weeks or months. To solve the problem, cardiologists put pieces of wire mesh called stents around the balloons. The stents remain in place as a piece of scaffolding to try to keep the arteries open. In some cases, however, cells grow over the wire, causing the vessel to close up again.

The drug-eluting stents were introduced to solve this problem by releasing a drug that prevents cell growth. The stents were approved for use in 2003, but have recently been found to trigger heart attacks by creating an ideal place for a blood clot to form and block the artery, causing a potentially fatal heart attack.

The new matrix materials could be used to make the stents less Prone to clot formation.

The research so far has been conducted with laboratory tissue cultures.

The work has been funded by the National Science Foundation through an NSF early career grant Panitch received while a researcher at Arizona State.