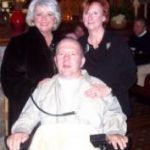 A column about restaurant happenings and food musings, home and away.

Just as the Great White Way darkens to signify a Broadway loss, so it seemed the lights of local eateries dimmed two and a half years ago when a mountain bike accident left beloved restaurateur Meredith Nicolls paralyzed below the shoulders. Practically no other chef mentored as many of the area’s top culinarians. Now those lights can brighten with news that motion returned to the index finger of his left hand.

Since the catastrophic injury, Meredith, known for his indomitable spirit, often willed his body to move. “I long imagined the sensation of holding Kathy’s hand or picking up a glass of wine,” he says. But waiting in the van recently while his wife Kathy ran into a grocery store, mentally ticketing vehicles parked illegally in handicapped-reserved spaces in (yes, he’s as deliciously wry as ever), he noticed he wasn’t just thinking about it, he was pointing at an inconsiderate offender. When Kathy returned, he repeated the action.

“I was overcome with emotion and burst into tears. It was an indescribable moment,” Kathy writes at www.meredithnicolls.com, a website where she, Meredith and friends and family candidly share updates. “The joy we both felt was immense. This was something we did not ever expect given the nature of his injury.”

A small gesture, certainly, but a colossal source of hope. And it adds to his growing list of accomplishments. He uses a computer with a mouth-controlled mouse called a QuadJoy, receives phone calls while wearing a headset, and continues on his quest for the quintessential espresso, sipping demitasse daily.

The most mundane activities demand Ironman strength and endurance, and pain persists, yet Meredith remains upbeat. The man who fed Hampton Roads so well at restaurants including Café Rosso, Kitchen at Powhatan Plantation and Meredith’s is still sought after by rising toques for his culinary intellect and uncompromising opinions. He’s gained weight and looks robust, thanks in part to an outpouring of support from the restaurant community and beyond. He and Kathy, who have shared an enviable, in-synch love for nearly two decades, are enormously grateful and graciously welcome guests to their downtown Norfolk home.

When Meredith Nicolls was a patient at McGuire VA Medical Center in Richmond, he and Kathy went on a field trip to Positive Vibe Café. They recommended it to me, and I lunched there last week. The automatic sliding door into a doublewide corridor is the first tip-off that this isn’t your run-of-the-mill restaurant. The host maneuvers his electronic wheelchair through the cheery, 70-seat restaurant. A busser has cerebral palsy, the cook preparing seafood pot pie is a gunshot victim with a spinal cord injury who’s had his workbench adjusted to accommodate his wheelchair, and the dishwasher is autistic. But perhaps those facing the biggest challenges are the diners who have to choose from a splendid variety of sandwiches (“clutched food”) and entrees (“utensiled food”).

Garth Larcen, backed by a host of donors and volunteers, opened Positive Vibe in 2005 with chef Rob Hamlin to train people with physical and cognitive disabilities in basic food service skills and prepare them for employment. It’s working as half of the 80 participants to date have secured jobs including some at The Jefferson and Willow Oaks Country Club. And if that’s not enough proof, the freshness and flavors of jambalaya, grilled cheese club sandwich and buffalo meatloaf plus genuinely caring service are sure signs of the café’s success. (2825 Hathaway Road, Stratford Hills Shopping Center, Richmond, 804-560-9622, www.positivevibecafe.com)