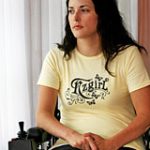 Karen Jones dreams of being able to use her hands again.

But the 29-year-old Auckland tetraplegic fears her brightest hope may be dashed after a Ministry of Health committee rejected an eagerly anticipated trial using transplanted stem cells.

The Spinal Cord Society wants to run the trial from a base in Dunedin, whereby stem cells taken from the person’s nose are injected into the spinal cord for the purpose of regenerating damaged areas.

The Ministry of Health’s multi-region ethics committee found the proposal for the trial to be lacking crucial information such as potential side-effects.

Ms Jones said the committee’s decision was highly disappointing for people such as herself who saw a real chance of recovery.

“It’s been done in Australia and Portugal and some other places around the world, so it kind of proves it has been safe. When they go on about false hope, no one has ever died from false hope, but plenty of people have died from no hope. It seems a little ridiculous.”

Ms Jones became a tetraplegic in a car accident on Christmas Eve, 1997. She has movement in her arms, but not in her hands. Everything below that is paralysed.

“If I had just my hand function back, it would mean a greater independence and freedom. At the moment, I need someone basically around me 24-7 to do everything for me.”

She had followed the progress of spinal injury sufferers at her level getting the stem cell treatment in Portugal “and most of them have got back, to some degree, hand function”.

“And one of the ones that I was following quite closely, she could stand and go on her tippy toes … after lots and lots of intensive Rehabilitation as well.”

Dr Cynthia Darlington, deputy chair of the ethics committee, said it was enthusiastic about this type of cell research. However, scientific evidence on the procedures was lacking.

“In the submission, 100 cases were cited as being successful, but information has only been published in seven.”

One potential outcome could be no positive results, but severe pain, Dr Darlington said.

Noela Vallis, who started the Spinal Cord Society 22 years ago after her husband broke his spine, said the practice was safe and the country’s high rate of spinal injuries meant it was “morally obliged” to run the trial.

Material called autologous olfactory mucosal tissue is taken from the roof of the nose. This tissue is chosen because it is regenerating and accessible.

This tissue is then cleaned, processed and transplanted into the damaged spinal cord tissue in a surgery at Dunedin Hospital.

The aim is that the tissue will re-grow the network of connections across the damaged area and therefore return movement.

At least two years of physical rehabilitation will follow to give the best chance of recovery.