If you can’t stand up, stand out.

That has been Marilyn Hamilton’s motto ever since she was paralyzed from the waist down in a hang-gliding accident almost 20 years ago. And in the midst of New York’s glitzy Fashion Week, one group of perseverant women showed that they share her philosophy. 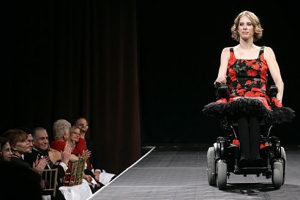 The event last week marked the inaugural fashion show for Discovery Through Design, a non-profit that raises money for spinal cord injury research and paralyzed women. Their Rolling With Style Gala, at New York’s Cipriani 42nd Street, showcased stylish wheelchairs designed by some of the top names in the fashion industry.

“It’s time for us to celebrate and honor the lifestyles and abilities of women in wheelchairs,” says Hamilton, who is one of four Discovery Through Design founders and creator of the ultra-light Quickie wheelchair.

“We have the same desires and same opportunities to participate in society and contribute in remarkable ways, and I just don’t think society knows yet.”

Under the Romanesque arches and lavish curtains at the restaurant, each designer had a turn to impress.

For each fashion line, traditional models strutted down the runway. They were followed by one of the four “roll” models, in attire and wheelchairs custom-created by the same designer.

The roll models were selected by Discovery Through Design after an essay competition and interviews.

“As a woman in a wheelchair, I get stared at,” says roll model Melissa Holley, 25, of Nashville from her new wheelchair, adorned in elegant black leather. “Now I’m getting stared at because I’m so fashionable. It’s very exciting.”

Holley, who just earned her master’s degree in organizational management from Vanderbilt University, has been in a wheelchair since 2000, when a car wreck left her a Paraplegic. Her new chair was designed by Marc Bouwer.

Nicole Miller, St. John and Kimora Lee Simmons also designed wheelchairs for other models: Jenny Smith, 34, of Louisville, who works for a non-profit that provides wheelchairs for the developing world; Michele Boardman, 20, of Harleysville, Pa., a biology major at Arcadia University near Philadelphia; and Rosemarie Rossetti, Ph.D., 53, of Columbus, Ohio, a speaker, author and consultant.

Leslie Stahl of 60 Minutes emceed the event, and pop singer/actress Shani Rigsbee and former pop star turned adult contemporary singer Deborah Gibson performed. But it was the roll models, the Discovery Through Design “chair-women,” as they playfully call themselves, and other honorees who stole the show.

A crowd of nearly 600 applauded when Army Staff Sgt. Eva Cochran of Springfield, Ill., a paralyzed veteran who was wounded in Afghanistan, won the Rolling With Style Award. The money raised — nearly $1 million — was donated to the Christopher Reeve Foundation, the Miami Project to Cure Paralysis and the Spinal Cord Injury Project at Rutgers University.