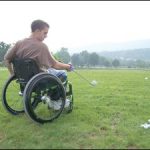 HIGHLAND LAKES – 2006 began with despair for the Ryan family of Highland Lakes. By the end of the year, it was filled with hope.

Last February, the Ryan’s oldest son, Michael, then 18, was taking his first snowboarding run of the day at Loon Mountain in New Hampshire with his brother, Eric, 15, and friend C.J. when he overshot a jump and landed on his back, shattering his tenth vertebra. A few hours later, doctors at Massachusetts General Hospital in Boston told Michael’s parents, Mike and Kim, that their son had severed his spinal cord and would never walk again.

The doctors were wrong. As they discovered during surgery to stabilize his spine the following day, Michael’s spinal cord was bruised and compressed, but not torn. Doctors then told the Ryans that it could take anywhere from six months to two years for the swelling around the spinal cord to go down, offering the family some hope that Michael might one day regain feeling in his legs.

After several more surgical procedures last winter, including a blood and tissue transplant aimed at promoting cell Regeneration around the site of the injury, Michael, now 19, has undergone months of Physical Therapy at Kessler Institute of Rehabilitation in West Orange to develop his upper-body strength.

In September, Michael began participating in a program at the Children’s Specialized Hospital in Mountainside, N.J., designed for children and young adults with spinal cord injuries. Under the so-called Functional Electrical Stimulation study, which is intended to build up leg muscles for people with such injuries, Michael and other patients use custom-made exercise bicycles equipped with electrical stimulation pads attached to parts of their legs to stimulate nerve endings and enable them to ride the bikes for 30-minute sessions three times a week. At this point, the machine is working Michael’s leg muscles, explains dad Mike. But he’s still new to the program.

The FES program has helped Michael keep his leg muscles from atrophying while maintaining his bone density. Both were important factors needed to help qualify him for Project Walk, an intensive exercise-based spinal cord injury recovery center in Carlsbad, Calif. Unlike most other spinal cord injury treatment centers, which focus on preparing paraplegics and quadriplegics for life in a wheelchair, Project Walk is intended to help people with such injuries to regain the use of their limbs.

To help pay for the trip, countless Vernon residents stepped up over the summer to organize fundraisers on Michael’s behalf. In July, the Vernon Police Athletic League ran a series of one-day lacrosse camps at Maple Grange Community Park. Brittany Marinaro of the Wallkill Valley Swim Conference organized a swim-a-thon. Later that month, a beefsteak/tricky tray was held at the VFW hall on Route 94.

“So many people and business made donations. I wish I could sit down and write everyone a ‘Thank You’ note but there have just been so many people; it’s incredible,” said Kim Ryan.

Then in August, a golf outing at Great Gorge Golf Club on Route 517 drew nearly 100 duffers. Plus, Nearly New Consignments, a store that opened in Vernon over the summer, donated 10 percent of its August sales to Michael.

The fundraisers drew enough support to send Michael, Kim and Mike to California for a two-week session at Project Walk. After arriving and settling into the condo they’d rented, Michael met with the owner of Project Walk along with his personal trainer, Chris. Chris explained that he wanted to focus on the part of Michael’s body where functioning stops and non-functioning begins to concentrate on stimulating and activating nerve endings from that point down. This would be done through thousands of repetitions of exercises and stretches, Chris explained.

On the second day of Michael’s visit, his feet were placed on a Power Plate machine. This is like a vibrating disc that’s used to promote blood flow throughout the legs.

“I could feel my leg muscles tingling on the Power Plate,” recalled Michael.

After using the machine, Michael worked with Chris on a set of resistance stretches, where Michael laid on his side and tried to move his leg into a bent position with Chris’ assistance. After doing this 20 or 30 times, Chris asked Michael to push hard and move his leg. With no assistance from Chris, Michael concentrated and moved his leg backwards under his own power.

It happened just that one time during the two weeks Michael spent at Project Walk. But for Michael and the rest of his family, “it was incredible,” he said. “I didn’t even know I was moving muscles on my own. The trainer was pulling my knee up to my chest and then he asked me to do it and I did.”

“I thought I was seeing things,” recalled Kim.

“When Michael pulled his leg up, we could feel the muscles tensing in his back,” says dad Mike.

One of the theories espoused by the Project Walk trainers is that through constant repetition, the human body will relearn motions in limbs that have stopped working, said Mike.

Since returning from California, Michael has resumed his physical therapy sessions at Kessler and the FES program in Mountainside. Kim says a facility that is loosely connected with Project Walk is expected to open in Bloomingdale, N.J., in a few months, offering Michael and other people with spinal cord injuries a local option for treatment. Meanwhile, Michael is planning to return by himself to Project Walk in California, perhaps in March, and has recently begun using a spin bike donated by one of Mike’s co-workers at Prudential Financial, Inc. of Roseland. Another Vernon resident, Mike Rizzo, donated a wheelchair lift that has made it much easier for Michael to go up and down the stairs in his house.

“There aren’t enough facilities around here for spinal cord injuries,” said dad Mike. He’s hopeful that Michael’s current exercise regimen will keep his muscles limber and his bone density high so that his son may one day be a top candidate for a stem cell procedure aimed at regenerating spinal cord tissue.

In the meantime, Michael remains busy and optimistic. He went skydiving in October at Skydive Sussex. That same month, he earned his driver’s license and is looking for a truck that he can have modified. “I’m looking forward to getting my truck and getting my independence back,” he said.