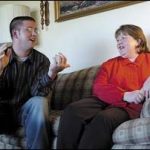 CARDINGTON – Jeff Radel is reminded on a daily basis what drinking and driving did to his life.

The 26-year-old Cardington man lives with double vision in one eye, numbness in two of his fingers and slurred speech as a result of a brain injury – the consequence of a bad decision he made nearly two years ago.

Radel hopes that his story will inspire others to think before having that drink and climbing behind the wheel this holiday season.
“It’s better I tell others what I went through. Learn from my mistake before someone else gets hurt,” said Radel who now works as a Voice for Injury Prevention speaker for the Central Ohio chapter of ThinkFirst, an international prevention program that focuses on brain and spinal injuries.

On Feb. 19, 2005, Radel went out for drinks with several of his friends. Though he has no memories of that night, he has since learned that he offered to take one of his friends home and then headed towards his parents house on Ruehrumd Road.

He never made it home that night.

To avoid being pulled over by law enforcement, the self-described “country boy” took back roads home. Along Ohio 746, Radel lost control of his vehicle, hit a ditch and rolled the vehicle several times before coming to rest in a field.

“To this day, I wish I would have rather got picked up by a police officer,” he said.

Radel, who was not wearing his seat belt, was ejected through the driver’s side window. He was in the field unconscious for nearly two hours before an off-duty firefighter happened to come across the scene. A medical helicopter was called in immediately to transfer Jeff to The Ohio State University Medical Center in Columbus.

“That was the longest trip to OSU that morning,” said Marlene Radel, Jeff’s mother. Doctors told her that her son had suffered a brain injury and that only time would tell how severely he would be affected. When he came out of his coma, it became apparent that he would need extensive therapy to relearn how to speak, among other things.

Marlene said that was when the real nightmare started; Jeff’s health insurance company declined his claim for benefits because he had engaged in illegal activity at the time of his accident.

“I don’t think many people know that, but it’s in the fine print,” she said.

Ann Womer Benjamin, director of the Ohio Department of Insurance, said that Ohio law stipulates insurance providers can deny coverage when alcohol or other illegal activity contributed to the cause.

“Insurers have to have some appreciation of Ohio law,” she said.

It may not stay that way for long, however. Currently there is a bill pending in the Ohio Senate that would change this portion of the law; Senate Bill 395 would require insurance companies to cover

losses that result from the insured being intoxicated or under the influence of a narcotic.

“People need to know what is in their insurance policy so they will have a better idea of what will be covered and what won’t be covered,” Benjamin said. “It’s important that people know ahead of time, before they have a loss, what they are protected for and from.”

After several months in the hospital and a year of Rehabilitation, Jeff was left with nearly $250,000 in medical bills, not to mention he faced criminal charges of driving under the influence, speeding and failure to wear his seat belt.

“It’s hard to say that all this has happened to me,” Jeff said. “Finally I realized what I did to my life.”

When Jeff learned that ThinkFirst was looking for volunteers to talk with teens about brain injuries, he decided to “get a good purpose to all this tragedy” and help.

“Our main thing is to bring awareness to brain and spinal cord injuries through education,” said Nina Ray, program director and state director for ThinkFirst in Indiana. “Everyone of our programs is attached to a neurosurgeon in the area.”

Through neurosurgeons, ThinkFirst is able to make contact with people who have suffered a brain or spinal cord injury to act as Voice of Prevention speakers. ThinkFirst began in Florida in 1987 after a physician there noticed a high number of brain and spinal cord injuries as a result of diving into shallow pools. Knowing that the majority of such accidents are preventable, the doctor launched ThinkFirst as an educational program.

Ray said that their presentations include a brief tutorial on the brain and how it functions, as well as a video with prevention speakers from across the country. Research has shown that audiences react to speakers more than any other technique used in presentations, Ray said.

“Quite frankly, the more factual they are the more likely the kids are to listen,” Ray said. “I will have to say that a lot of our injured speakers were injured as a result of drinking and driving. That’s part of it, they have to admit they were taking a risk.”

Three times a month he speaks before groups of teens and their parents about his experience. Most of the teens have been court ordered into programs due to having poor driving records.

“What you do could hurt many other people,” Jeff said. “It’s not you think you’re okay, it’s how many drinks have you had? If you have two, three, four, call a cab. Just stay safe.”

Jeff is also an advocate of seat belt use and discourages teens from using drugs and alcohol.

Although his life has changed dramatically since his accident, Jeff said he was actually very lucky that night. No one else was injured and his injuries could have been much worse.

“I’m still here and grateful for every moment I’m here living,” he said. “I just appreciate more in the world now.”

A bike for the paralysed