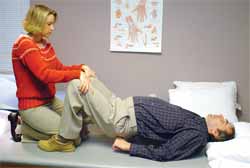 Terry Cole of Sikeston works on core muscle strength during a therapy session with Brooke Reed.

SIKESTON — After returning a week ago today from China, where he received stem cell treatments, Terry Cole is wasting no time working to gain movement.

“Jan. 4 will be 32 years,” Cole said about recalling the last time he’s felt any movement in his feet since he was paralyzed after suffering a spinal cord injury in a car accident.

Cole’s Occupational Therapist Brooke Reed of Ozark Therapy in Sikeston said all of Cole’s toes have movement, and he has hip flexor movement.

“He didn’t have any of that before his stem cell treatments,” Reed said.

When the Coles arrived in China on Oct. 30, Cole underwent several tests before he received any of his stem cell treatments.

“They do a lot of tests on you when you get there and right before you leave,” Cole said. “They keep very good records and take video of any improvements.”

Throughout his stay, Cole took four injections of about 10 million stem cells each and one IV into the spinal cord fluid.

“They drew fluid out of my spine and then inserted the same amount of stem cells,” Cole said.

Each stem cell procedure took only 15 to 20 minutes, but following each procedure, Cole was required to lie flat for four hours and then on his side for three hours. And he couldn’t eat or drink for those first four hours.

“I saw the stem cells. They look like a bag of red plasma except for it’s yellow,” Cole recalled.

“The Chinese are really working on it,” Cole said about their endeavors to treat spinal cord injuries through stem cells.

Cole said the two-year-old hospital he was treated at will eventually specialize in treating only spinal cord injuries.

In addition to receiving treatment, Cole said it took some time getting used to living in another country.

“The first couple of days were a culture shock, but then we enjoyed it,” Cole said.

One of the biggest differences from America was the public restrooms, which consisted of ceramic-tiled holes in the floor.

Although he did try a Chinese delicacy of camel, Cole said he and his wife mostly stuck to meals from Kentucky Fried Chicken, McDonald’s and Papa John’s Pizza.

“It was different,” Cole said. “It was a communistic country, but it was very modern in a lot of ways but backward in a way.”

Cole even learned to say thank you and hello in Chinese.

Cole met patients from all over the world — Rome, Australia, Canada. Cole even met a St. Louis woman who knew someone from Sikeston.

“All of the foreigners stayed on the same floor. We got to be like a family,” Cole said.

The doctors in China sent information about Cole’s treatment, test results, etc. to his therapists in Sikeston.

Reed said she was pleased with the treatment Cole received while in China. “Some of his therapy was nontraditional — and I wish we could utilize it more here,” Cole’s occupational therapist said.

Monday was Cole’s first day back to therapy after returning from China. “We’re working on the active motion he’s gained and on weight bearing. This will help with him standing and kneeling on all fours,” Reed said.

Reed said her plan is to push Cole to the maximum level so he can gain more movement and hopefully stand without a standing frame.

“Once he starts to progress, if it’s easy, then we’ll move up to the next level,” Reed said.

Of course, Cole couldn’t have done any of this without the support of his wife.

“She was by my side the whole time. I’m glad she went with me,” Cole said. Cole’s doctor in China recommended Cole return in three to six months for more stem cell treatment.

“We’re making reservations to go back in May for more treatments, but we haven’t made up our minds yet if we’re going to go,” Cole said.

Cole and his wife are waiting to see how he progresses. So far Cole is very pleased with his results.

“I’d recommend it to anybody if they wanted it,” Cole said.

Patients Speak Out on Capitol Hill