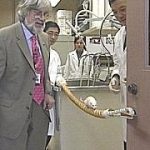 LOUISVILLE, Ky. — Debilitating spinal chord injuries not only affect mobility, but can lead to other serious health problems.

However, a new groundbreaking study conducted at the University of Louisville’s School of Medicine may lead to a new therapy to reverse those effects.

With the help of 10 years of research, a Louisville doctor is using stem cells from nasal passages to help rebuild damaged spinal chord tissue.

“It’s terribly exciting; we do research all our lives,” Dr. Fred Roisen said.

“What really is the importance of a stem cell? The importance is you can take a cell and use it to replace damaged cells in the human body.”

Roisen doesn’t use the controversial embryonic stem cells, but uses the more stable adult stem cells taken from the nose.”You’ll see we’re going to take a little tiny piece of tissue about the size of a pin head,” Roisen said.

Dr. Roisen’s study has shown in the laboratory that the adult stem cells can change into neurons that help heal the break in damaged spinal tissue that is responsible for carrying electric signals to the nervous system.

“So there’s an injury, there’s a gap in the rat’s spinal cord,” Roisen said. “They fill the gap, they pump out the growth factors and they elongate and they literally make a bridge across the break.”

Using rats with spinal defects as test subjects, Roisen’s therapy virtually healed a rat with a paralyzed paw in about 11 weeks.

Roisen’s research also showed there is a possibility a person with a spinal chord injury could be healed using stem cells from their own nose, which means less chance of rejection and no need for anti-rejection medication.