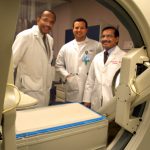 Patients with recurring problems with the heart slowing or stopping after a neck injury damages their Cervical spinal cord may need aggressive therapy to avoid further cardiovascular problems and even death, Medical College of Georgia researchers say.

A study subset of newly injured quadriplegics showed that less aggressive therapies, such as drugs and a pacemaker placed on top of the chest, simply were not sufficient, says Dr. Andres F. Ruiz-Arango, cardiology fellow and corresponding author of the article in the July/August issue of Cardiology in Review.

“There is a group of these patients who are not going to survive acute hospitalization but you don’t want them to die just because they need a pacemaker,” says Dr. Ruiz-Arango.

With a cervical spinal cord injury, the influence of the sympathetic nervous system – called the fight or flight system because it responds to stress by enabling an increase in heart rate – can be injured or lost while the impact of the parasympathetic system continues, he says.

The result can be a dangerously slow heart rate, called Bradycardia, which causes blood pressure to fall, organs to get insufficient blood and oxygen and can progress to heart stoppage, says Dr. Vincent J.B. Robinson, nuclear cardiologist and study co-author.

“It’s the balance between sympathetic and parasympathetic nervous systems that keeps your heart rate in the normal range,” says Dr. Ruiz-Arango. When patients lose this balance and start having dangerously slow rates, doctors typically try drugs, such as atropine and epinephrine, to increase heart rate and a transcutaneous pacemaker on the chest.

It suggests transvenous pacing – in which a lead is inserted into the heart – may be a better first alternative in patients with ongoing difficulty maintaining their heart rate in the hours and days following an injury.

“Nobody really knows the best therapy,” says Dr. Sharma. “This gives us some direction that if you see a very slow heart rate, if the patient’s heart is stopping for three, four or five seconds, you think about putting in a transvenous pacemaker and see how they do and maybe put a permanent pacemaker in sooner rather than later.”

Although essentially all patients with cervical spinal cord injuries have problems maintaining an adequate heart rate for a time, amazingly, even some with severed cords will not need a permanent pacemaker, Dr. Ruiz-Arango says.

That’s one of many reasons why when patients have heart rate problems, doctors struggle with the best treatment approach, often opting for the least-invasive options.

Transvenous pacemakers can increase infection risk in already-compromised patients. Also gaining adequate access for lead insertion can be difficult in a neck secured because of a spinal injury. “Risk of infection is a big problem because many of these patients have ongoing infections such as pneumonia,” says Dr. Sharma. “Fortunately we did not find pacemaker-related infections in this small cohort.”

“What doctors usually do is put a transcutaneous pacer on the chest and just kind of ride it out,” says Dr. Robinson. “But what we found by going over these patients’ data was that external pacemakers do not seem to be reliable in these patients and patients run into a lot of problems.”

Ironically, regular activities these patients need to survive, such as Suctioning secretions, drawing blood and even bowel movements, can trigger activity of the vagus nerve, which mediates the parasympathetic system’s influence on the heart.

One patient’s heart stopped beating and he had a seizure when blood was drawn, Dr. Robinson noted. “We put a pacemaker in and he has been fine ever since,” he says. “These patients have lost their sympathetic response so the vagal tone is always predominating. In patients showing ongoing symptoms, we found it’s much more important to go ahead and put that transvenous pacemaker in and keep them stable.”

While the researchers suggest rapid preventive action in patients with recurring episodes of bradycardia, strict treatment guidelines for these patients can’t yet be developed because of the limited number of patients in their study, they say.
They already have begun a larger study with doctors at the 60-bed spinal cord injury unit at the Veterans Affairs Medical Center, also in Augusta.