Within weeks of experimental stem-cell surgery Oct. 29 in Portugal, Jacki Rabon – paralyzed from the waist down after an auto accident two years ago – was standing and walking in Detroit.

But metal braces and an aggressive Rehabilitation program in Michigan, not restoration of sensation in her legs, were what helped the 18-year-old take steps she hadn’t attempted since a rollover accident in August 2003.

It’s too soon to know whether the $44,000 surgery, in which tissue from her nose was transplanted into the damaged section of her spinal cord, will bring back any feeling or control for Rabon, a former standout high school volleyball player from Waverly, Ill., a rural town of 1,300 people.

But she has returned to central Illinois grateful for a smooth surgery and for financial support from friends and strangers. She and her mother, Becki Rabon, 52, say they are prepared for the hard work and uncertainty ahead.

“Right now the future is rehab, one day at a time,” Jacki said, sitting next to the EasyGlide exercise machine she uses an hour each day.

Jacki is soft-spoken and calm and doesn’t appear to be impatient with her progress so far. Becki said her daughter has a quiet determination.

“That’s why she has gotten so far,” Becki said.

Dr. Steven Hinderer of the not-for-profit Rehabilitation Institute of Michigan, who helped Jacki gain access to the surgery in Portugal, said her attitude will help over the months – perhaps years – it will take before the procedure’s outcome is known.

“A girl like Jacki has her whole life before her,” Hinderer said. “And heaven forbid that she would wonder, ‘Was there an opportunity missed?'”

Rabon felt some intense soreness in her hips a few days after the surgery, a new sensation for her. That could have been a sign the stem-cell transplant was working, but Hinderer said the soreness more likely was a temporary side effect of the surgery, not regrowth.

“Real improvements are going to take a lot of time,” Hinderer said.

Jacki and her mother, a nursing technician at St. John’s Hospital in Springfield, Ill., flew to Lisbon from St. Louis on Oct. 25. There, at Hospital de Egas Moniz, they met Dr. Carlos Lima, a Portuguese neurologist who pioneered the experimental surgery, known as olfactory mucosa transplantation.

The surgery, not yet allowed in the United States, has generated international interest among spinal-cord injury patients because of hopes that it will promote spinal-cord repair previously thought to be impossible.

All of Lima’s approximately 80 patients – half of them Americans – who have undergone the surgery in Portugal since summer 2002 have reported some gains in sensation, and about 5 percent say they have better feeling in their bladders and bowels, Hinderer said. But no one is walking without braces, and it’s not clear if the improvements were related to the surgery.

“Even though we don’t see dramatic Motor function yet, and we don’t know if we will,” Hinderer said, “clearly there has been improvement in sensation in a number of areas of the body that had either no or poor sensation.”

Lima hasn’t yet published any of his results in a peer-reviewed scientific journal, although the first article is expected this year in the Journal of Spinal Cord Medicine.

The Rabon family heard about the surgery through a television special on Lima’s work and his scientific association with Hinderer.

The surgery wasn’t covered by the family’s health insurance, provided by the employer of Ray Rabon, Jacki’s father and Becki’s husband, but fund-raisers generated about $50,000 for Jacki.

Jacki said she wasn’t nervous until she woke up in her hospital bed the day before the surgery. She cried when she was wheeled into the operating room, she said. The nurses with her stroked her face and tried to reassure her with words she didn’t understand. They were crying with her, Jacki said. Then she lost consciousness.

Outside the operating room, Becki was nervous even though she had educated herself on the procedure. She was thinking: “I’m in a different country. How do I know what they’re going to do to her in that room when I’m not around?”

The surgeons removed tissue from the olfactory bulb through tubes inserted in both nostrils. The tissue is thought to contain stem cells – cells that can grow and multiply into an array of more specialized cells.

The tissue was inserted into the 4-centimeter gap in Jacki’s spinal cord caused by the injury. Based on animal studies, Lima and other researchers believe the tissue can change, over time, into nerve cells and promote new spinal-cord pathways.

A week after the 12-day trip, Jacki, her mother and Jacki’s niece headed to Detroit for 2 1/2 weeks at the rehab hospital. Hinderer’s program offers intensive, three-hour rehab sessions for spinal-cord patients. Half have undergone experimental surgery overseas and half simply are hoping for greater mobility.

Jacki strained to crawl on her hands and knees and walked – with the help of leg braces and other supports – 75 feet.

“It felt funny,” she said. “I had no balance. It was like floating.”

This aggressive approach – not offered in most parts of the United States and often not paid for by health insurance – is needed to get the most out of Lima’s surgery, Hinderer said.

“The nervous system needs to be stimulated frequently to reorganize and adapt to the changes that are going on inside,” he said.

Critics say the surgery/rehab combination is a waste of money. They say it raises false hopes and sidetracks patients who should be getting on with their lives. Jacki has put her college plans on hold to focus on rehab.

Becki Rabon said she’s frustrated that this type of rehab isn’t offered in Springfield. She recently was relieved to learn that her family’s insurance paid for 80 percent of the rehab expenses from Detroit.

Hinderer, however, wants Jacki to return to Detroit for at least three more months of therapy, which would cost at least $10,000. Becki said she hasn’t ruled it out. But she said she needs to get back to work at St. John’s, and Jacki needs to get into a rehab routine at home.

In recent weeks, Jacki received specially fitted leg braces, costing $7,000 to $10,000, and her family is waiting to see whether its health insurance plan will cover part of the cost.

As part of Jacki’s rehab routine, she is “walking every day with the braces,” Becki Rabon said.

Jacki’s family bought the $5,000 EasyGlide equipment with the remainder of a settlement with the insurance company for the driver of the car Jacki was riding in during the accident.

Neither Jacki nor her mother regrets the pain and effort connected with the surgery. Now they must wait.

Becki said she believes that the surgery has helped restore some feeling in Jacki’s hips and resulted in what Becki called “funny sensations” in Jacki’s legs.

“There’s lots of stuff going on,” Becki said. “I’m sure she has more than she had before she went to Portugal.”

The Detroit Free Press, which has chronicled the journeys of several of Lima’s American patients, reported Dec. 4 that most patients “don’t see substantial gains until at least six months after surgery.”

Jacki, who spends most days working on the EasyGlide, using the braces, watching television and driving around Waverly with her boyfriend, said she hasn’t set a deadline.

“I probably will get frustrated, but that’s OK. That’s to be expected,” she said. “When it happens, it will happen and that will be great, but I’m not estimating a certain amount of time.”

Jacki Rabon has written about her experience in Portugal, Detroit and Waverly in an online journal that can be reached at caringbridge.org/visit/jaclynrabon.

For more information on the Rehabilitation Institute of Michigan’s work with spinal-cord injury patients, go to www.centerforscirecovery.org. 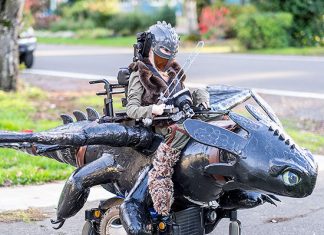