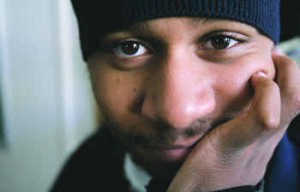 Nat Little gently wraps his arms around Tamela Johnston and squeezes with all the strength he can muster.

“Good,” the personal trainer tells him. “It’s getting stronger.”

A simple hug is a big step for the former Carrollton R.L. Turner High School football player, who was paralyzed from the neck down in a spring football game 1 ½ years ago.

Thanks to the help of strangers, friends and family, Nat is on the road to recovery – one small step at a time.

He can scratch his head, wiggle his toes and operate his motorized wheelchair with either hand.

“He’s doing things they didn’t say he would do, so we’re very, very blessed,” said his mother, Nita Little. “Before, we could only hug him, and now he can hug us back.”

In the fourth quarter of Turner’s spring scrimmage May 21, 2004, Nat, a junior middle linebacker, headed for fullback Marcus Robinson. As Nat went for the tackle, he fell awkwardly and flipped over Marcus, landing headfirst on the synthetic turf.

Nat realized something was wrong. He tried to get up, but he couldn’t.

He saw the worried looks of teammates, his coach and his mom, who had watched her son from the stands.

Nat fractured his C-5 vertebra and bruised his spinal cord. He didn’t realize the night of his injury how dramatically his life would change because of one football play, leaving him in need of constant care and attention.

It wasn’t the first time Nat faced a serious health problem. When he was a sophomore in high school, he nearly died on a band skiing trip in Colorado after having a rare pulmonary reaction to high altitude. Doctors at the time said they’d never seen a person with an oxygen level so low – except in a corpse, his mother said.

And Nat decided that life goes on. Proving his point, he returned to high school in August – three months after his injury – to finish his senior year and graduate with classmates.

But therapy and insurance could only do so much. The family wasn’t given much hope for improvement.

That’s when Mrs. Johnston, owner of A Link for Life in Farmers Branch, came into the Little family’s life. She tracked Nat down in October 2004 after seeing a television report about him.

Mrs. Johnston, a master of Oriental medicine, massage therapist instructor, certified personal trainer and reiki master, told Ms. Little she could help her son at no cost to the family.

“There was something that told me if I can get to him within six months, there’s a chance,” she said.

Nat began visiting Mrs. Johnston’s wellness center in January 2004, and he has spent time there almost every day since then, working with Mrs. Johnston and another personal trainer, David Mays.

When he started, he could barely operate the controls on his wheelchair with his left arm. He wore a strap across his chest to keep his body in place in the chair, and moving either arm caused pain in his shoulders.

Frequent visits to the wellness center, however, have changed that, he said. Nat undergoes massage therapy, lifts small weights and exercises with personal trainers.

On a recent morning, Mrs. Johnston checked the sensations in Nat’s arms as he was lying on a mat. She rubbed his hands, stretched his fingers and asked him to take deep breaths.

“It’s hard to suck in my stomach, because I don’t have full control of my muscles,” Nat said.

Mrs. Johnston reassured him. He had been able to do this exercise before.

“He is a firm believer and has that statute: ‘By the grace of God, I will get better,’ ” Mrs. Johnston said.

The last year is proof of that. Nat can now move both arms. He can lie on the ground and move his knees. And he’s regained feeling below his chest.

Nat’s mother calls the center’s work a blessing. “God put them in our lives at a time when we didn’t know what we were going to do,” she said.
Bond of friendship

Mrs. Johnston wasn’t the only person who stepped in to help. Nat’s best friend and football teammate, Chris Ruiz, has grown even closer to Nat and his family.

Chris said Nat’s injury changed their friendship for the better.

Getting to school and around campus would be difficult for Nat if not for his friend. Chris signed up for all of the same classes – English, speech, psychology and math.

Nat wakes up every Tuesday and Thursday between 6 and 6:30 a.m. An aide helps get him out of bed, dressed and ready for school. The morning routine takes about two hours.

Chris arrives at Nat’s house shortly before 9 a.m. to pick him up. He leaves his car at the Little family’s house and drives the van, which is equipped with an electric ramp that slides down to let Nat in.

“If it weren’t for him, I would probably be late to class,” Chris said. “I’m just not a morning person, period.”

Last month, Nat began his second semester at North Lake. With the help of a note-taker provided by the college, he’s taking basic courses before transferring to the University of North Texas, where he plans to major in broadcast journalism.

In school, Nat sits back and listens quietly.

On the second day of speech class this semester, the professor asked students about their pet peeve.

“Nothing gets on my nerves,” Nat said.

After giving it more thought, he added: “Can I change mine?”

He explained that he doesn’t like people who talk about others without having met them first.

Since his injury, Nat has had a lot of time to listen to music. He listens to everything – rap, reggaetón, some country and rock. But smooth oldies, like Luther Vandross and The Temptations, are his favorite.

Like the oldies music, Nat is laid-back. Sometimes a little too laid-back, he told his speech professor and classmates, when asked to describe his worst trait.

On a recent evening, Nat, a former saxophone player, listened to his favorite tunes and burned a CD in his makeshift bedroom – previously the den in his house. Autographed footballs from the Baylor Bears, Atlanta Falcons and Pittsburgh Steelers line his bookshelf.
Family’s challenges

The family has faced some serious financial and physical challenges – including finding people to care for Nat, transporting him and making sure he’s comfortable and able to get around the home.

Shortly after Nat’s accident, Ms. Little decided to convert the living room space because his old room is upstairs and can’t be accessed by a wheelchair.

Ms. Little, who’s on the technical staff of a telecommunications company, said she’d like to find a one-story house so Nat can move around more easily.

She said not returning to Texas Tech was “the easiest decision” she’s made. During her stay at home, she helped her brother with daily tasks, shuttling him to therapy sessions or just hanging out with him.

“If the shoes had been reversed, I’d be the most miserable quadriplegic in the world,” she said. “It surprised me how strong one person can be. Life got easier and harder at the same time.”

Family members say the sacrifices have been worth it. Nat’s attitude and progress have been impressive.

“Nothing’s changed about Nat except he’s not moving around as much, but he’ll be moving again,” Ingrid said.

By then, Nat hopes he’ll be a famous sportscaster like John Madden.

But his career goals don’t stop there. He also wants to be a sports agent or business entrepreneur.

“I got to get my hands on everything I can, be successful like Bill Gates or Donald Trump,” he said with a smile. “That would be real cool.”