The Lancet Neurology: Pioneering study suggests that an exoskeleton for tetraplegia could be feasible 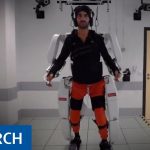 A four-limb robotic system controlled by brain signals helped a tetraplegic man to move his arms and walk using a ceiling-mounted harness for balance. While the early results are promising, the authors note that the system is a long way from clinical application and will require improvements before it becomes widely available.

A whole-body exoskeleton, operated by recording and decoding brain signals, has helped a tetraplegic patient to move all four of his paralysed limbs, according to results of a two-year trial published in The Lancet Neurology journal.

The study successfully trialled a four-limb robotic system, and the authors say that, once some necessary major improvements are available, it could have the potential to improve patients’ quality of life and autonomy, but for now it is an experimental treatment far from clinical application.

“Ours’ is the first semi-invasive wireless brain-computer system designed for long term use to activate all four limbs,” says Professor Alim-Louis Benabid, President of the Clinatec Executive Board, a CEA laboratory, and Professor Emeritus from the University of Grenoble, France. “Previous brain-computer studies have used more invasive recording devices implanted beneath the outermost membrane of the brain, where they eventually stop working. They have also been connected to wires, limited to creating movement in just one limb, or have focused on restoring movement to patients’ own muscles.”

In cervical spinal cord injury, the most severe of spinal cord injuries, around 20% of patients are left tetraplegic, with all four limbs partially or completely paralysed. The 28-year-old patient in the new trial was paralysed from the shoulders down, with only some movement in his biceps and left wrist. He was able to operate a wheelchair using a joystick controlled with his left arm.

Two recording devices were implanted, one either side of his head between the brain and the skin, to span the sensorimotor cortex (the area of the brain that controls sensation and motor function). Each recorder contained a grid of 64 electrodes which collected brain signals and then transmitted them to a decoding algorithm. This system translated the brain signals into the movements the patient thought about, and sent commands to the exoskeleton to complete them.

Previously, another patient was recruited to the study but was excluded because of a technical problem with the brain implants (the implants stopped communicating with the algorithm and were removed).

Throughout the 24 months of the study, the remaining patient did various mental tasks to train the algorithm to understand his thoughts and to progressively increase the number of movements he could make. This included controlling a virtual avatar to play a video game (he played a game similar to Pong), reach for targets with an avatar and in the exoskeleton, and walk.

The patient’s progress was measured in terms of how many degrees of freedom he was able to achieve during tasks, from operating a brain-powered switch to start walking, to reaching out to touch 2D and 3D objects. The exoskeleton had 14 joints and 14 degrees of freedom (it was able to move in 14 different ways). He spent a total of 45 days operating the exoskeleton in the lab and the skills he acquired were reinforced with 95 days spent training at home with a researcher using an avatar and video game. 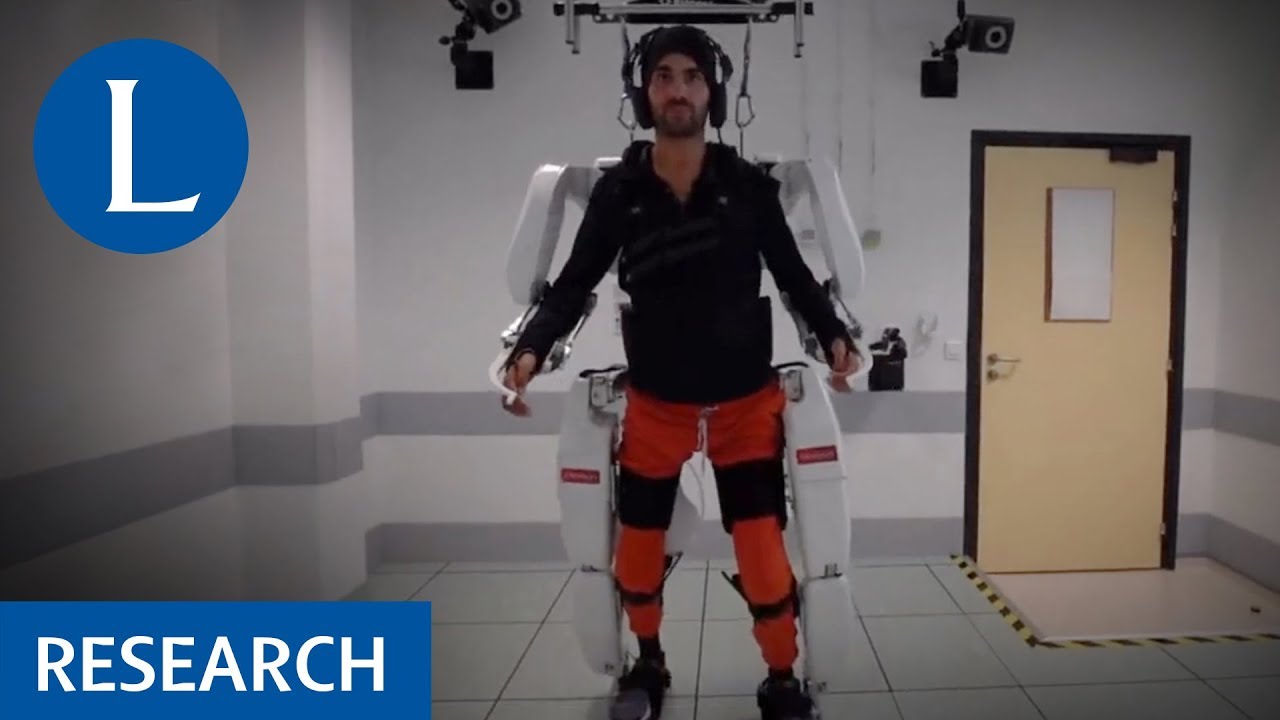 The simplest tasks were to turn the brain switch on to start a walking in video game where he made an avatar walk, and to make the exoskeleton start walking while attached to the suspended harness. His success was measured in terms of how many times he managed to activate the switch. Two months after surgery, he was successful 73% of the time during six sessions using the exoskeleton. Using the avatar, video game and exoskeleton combined, he covered a total of 145 metres with 480 steps over 39 sessions.

“Our patient already considers his rapidly increasing prosthetic mobility to be rewarding, but his progress has not changed his clinical status,” says Professor Benabid.

Using both the avatar and the exoskeleton for more complex tasks, he progressed from reaching out to targets on cubes with one hand at a time (moving in three dimensions) five months after surgery to using both hands to touch targets on the cubes 16 months after surgery (moving in eight dimensions, including rotating both wrists). He completed five eight-dimensional tasks with a success rate of 71%.

“Innovative adaptive algorithms based on artificial intelligence methods (machine learning) have been developed to decode a large number of degrees of freedom. The exceptional quality of the collected neural signals allowed a stable and robust decoding,” says Dr Tetiana Aksenova, BCI signal processing research director from University of Grenoble, France.

Over the 24 months of the trial, the system did not need to be recalibrated for up to seven weeks, demonstrating that it may be suitable for day-to-day use over a long period. The quality of the recordings from the implants remained stable, the algorithm continued to decode the signals, and the patient experienced no post-surgical complications.

“Our findings could move us a step closer to helping tetraplegic patients to drive computers using brain signals alone, perhaps starting with driving wheelchairs using brain activity instead of joysticks and progressing to developing an exoskeleton for increased mobility,” says Professor Stephan Chabardes, neurosurgeon from the CHU of Grenoble-Alpes, France.

Three further patients have been recruited and the trial is ongoing. The next goal of the researchers is to solve the problem of allowing a patient to walk and balance autonomously without using a ceiling suspension system.

Further studies will also shed more light on brain function, providing more information on how the sensorimotor cortices generate the signals needed to achieve real and virtual movements. The authors found that the patient was able to perform tasks with an average of 10-20% greater success using the exoskeleton than with the avatar. This may be because feedback with the avatar is purely visual, whereas with the exoskeleton the patient gets richer feedback from the real world.

Writing in a linked Comment, Professor Tom Shakespeare from the London School of Hygiene and Tropical Medicine, UK, says: “An originality of this study is showing the control of four limbs, whereas in most previous studies only one limb was controlled. However, autonomous walking with equilibrium is not so far possible. Although this study presents a welcome and exciting advance, we must remember that proof of concept is a long way from usable clinical possibility. A danger of hype always exists in this field. Even if ever workable, cost constraints mean that high-tech options are never going to be available to most people in the world with spinal cord injury. One analysis suggests that only 15% of the world’s disabled population have access to the wheelchairs or other assistive technologies that they need.”