Surviving a spinal cord injury is something to be thankful for, but it’s still devastating. 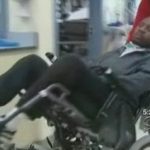 For one New Yorker, an accident changed his life forever – but a new device is helping him regain his independence.
Spinal cord injuries not only affect a person’s ability to move – they can also hamper patients’ ability to breathe. When that happens, patients are required to be attached to a bulky ventilator at all times.

Now, though, a device is helping one spinal injury victim get off the machine and breathe easier.

“I ended up hitting the concrete – well, the turf,” Jamal said.

“His neck kind of got forced over, forward, and he immediately lost function in his arms or legs,” Dr. Thomas Bryce, of Mount Sinai School of Medicine, says.

Jamal was unable to breathe on his own.

“Jamal injured his spinal cord right at the C3 level, which is the third one down,” Dr. Bryce says. “That’s why the signal to breathe can’t get by where that injury is.”

Jamal became dependent on a ventilator, all the time, to stay alive.

“When you’re on a ventilator, you’re at high risk for having an infection,” Dr. Bryce says. “It’s noisy, big, and bulky.”

Anxious to gain more independence, Jamal became the first patient in the northeast to receive a diaphragmatic pacing device.

“I was more than willing to try,” Jamal says.

The Food and Drug Administration approved the portable device less than a year ago. It triggers breathing through electrodes implanted in the diaphragm.

“It serves as a source of electrical activity to stimulate the diaphragm, and it contracts the diaphragm and lets patients breathe or get ventilation,” Mt. Sinai’s Dr. Todd Weiser says.

When the device is first implanted, it’s only used for a few hours a day to allow the muscles of the diaphragm to become stronger.

When the muscles strengthen, the device is used all the time and can fully replace the standard respirator.

While on a ventilator, Jamal was unable to use his sense of smell. His first day with the new device changed that.

“I was able to smell perfume, flowers, everything,” Jamal said.

“This will gain him some latitude in freedom and quality of life,” Dr. Weiser says. “Patients that have had this device have even gone on to go skydiving.”

Currently, the diaphragm pacing system is only approved for patients with spinal cord injuries.

However, research is going on now to see if it will also be effective in other neurologic illnesses, like ALS or Lou Gehrig’s Disease.

Results should be available by the end of the year.