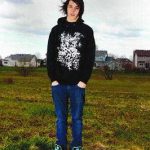 After trampoline flip nearly paralyzes Oswego teen, he and surgeon warn to think first before jumping into play

Kameron Botka of Oswego says he has a “history of doing stupid stuff,” but after several broken bones during his childhood and a trampoline accident requiring spinal surgery last fall, the junior at Oswego High School insists he’s more safety-minded now.

The surgeon who performed the five-hour operation that spared Kameron from life with limited mobility says it’s common for young people to be unaware of injuries that can impact the rest of their lives.

“People often ask how can we cure spinal cord injury, and the best way is to prevent it,” said Dr. Fred H. Geisler, a neuro-spine surgeon at Rush-Copley Medical Center in Aurora. “It’s great if you can dodge a bullet, but it’s best not to have any bullets.”

To avoid injuries that lead to life-altering paralysis, “think first,” says the surgeon, referring to the ThinkFirst National Injury Prevention Foundation that provides tips on making safe decisions about activities.

“It’s not so much organized sports where we see the most spinal cord injuries,” said Geisler. “Most of the spinal cord injuries in the age group below 20 years are caused by diving in the shallow end of pools, or in motorcycle and dirt bike riding, and trampoline accidents.”

The latter was what caused Kameron’s injury on Sept. 26, 2008, after he over-rotated a flip on his neighbor’s trampoline and landed flat on his face.

“I got knocked out and couldn’t feel anything from the neck down,” he said. “I thought it was just a sprain at first, but my hands started tingling and then we knew something was wrong.”

Home at the time was his father, Tom Botka, a firefighter, and his stepmother, Lori Botka, a surgical nurse. They decided to call 911.

“Everybody always thinks a safety net is going to save you, but if you don’t land on the net, it doesn’t make a difference,” said Tom.

Kameron landed on the trampoline, so the net played no part in the incident.

Kameron’s mother, Jane Botka, is a pediatric nurse and said when adults or teens play on a trampoline, their body weight vaults them high into the air, adding to the risk. “The more you weigh, the higher you go,” she said. “Kameron has always been one of those fearless kids.”

When paramedics arrived at Rush-Copley Medical Center’s emergency department with Kameron, Geisler was ready. His professional profile describes him as a founding member of the CINN Institute for Spine Care and one of the nation’s leading authorities on spinal cord injuries and degenerative diseases of the spine.

Jane said upon meeting him, she knew her son was in capable hands.

“As a mother and as a health-care professional, I knew Dr. Geisler was competent and qualified,” she said. “He was a godsend.”

Geisler explained that the ligament that holds the spine together had been torn in Kameron’s fall. But upon evaluating him, he was confident surgery would be successful.

“At that point, I knew if we did everything right, we would have a happy story,” Geisler said.

During Kameron’s five-hour surgery, Geisler realigned his spine with traction and bolts that will remain in place for the rest of Kameron’s life. He spent just three days in the hospital and took part in physical rehabilitation for six weeks. In November, he returned to school. He’s still restricted from sports, but for the most part, Kameron said he’s doing great.

His mother said she hopes he takes every day as a gift.

“He came so close to not having the life he has,” she said.

And his dad is reminded of Kameron’s accident every time he sees a trampoline in someone’s backyard.

Kameron has a new perspective on recreational activities.

“Before the accident, if I wanted to do something (risky), I just did it. … Now, I still get tempted to do things, but I think about it,” he said.

Geisler said adults have more common sense about consequences of injury. But until then, young people need to be reminded to think first before taking part in activities that have significant risk.

“For athletes who are trained on trampolines, they have spotters, coaches, trainers, but to casually use the trampoline, to me it’s just not worth it,” Geisler said. “You have to watch out for yourself.”

By ROMI HERRON For The Beacon News