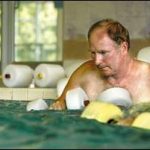 The embryonic stem cell debate marches on, from pulpit to politics to Parkinson’s patients hoping beyond hope a cure is found.

Lee Sippel, of Fond du Lac, and Stacy Ellingen, of Eden, see future research as the key to unlocking their limitations. Sippel suffers from a spinal cord injury, and Ellingen faces the challenges of the world through the eyes of a person with cerebral palsy.

Kathleen Salm, diagnosed with diabetes four years ago, believes that using embryos at any stage, even those smaller than a period, is murder. Her view is a staunch Catholic one, believing life begins at conception.

President Bush’s July 18 veto of the Stem Cell Research Enhancement Bill kept in place restrictions on federal funding of embryonic stem cell research established in 2001. It forbids the creation of new cell lines and the use of embryonic stem cells in settings that receive government funding.

The veto, his first and only veto in 5½ years as president, also fueled the fire of an issue charged with emotional and moral heat.

Scientists fret that the United States will now fall even farther behind the pace of the rest of the world when it comes to stem cell research. According to Medpage Today, in 2002, about a third of the 10 published articles involving human embryonic stem cells were from U.S. research groups. Two years later, U.S. groups accounted for only one-quarter of the 77 publications.

“Anytime we are limiting research, we are putting our country at risk when we know our competitors are doing the same kind of research,” said Fond du Lac’s John Whitsett, president of the National Science Teachers Association.

Born with cerebral palsy (a condition, not a disease she points out) 21-year-old Stacy Ellingen believes researchers in the future could possibly find a cure for CP.

“I don’t know if it will be in my lifetime, but someday I have no doubt, there will be,” she said.

A student at the University of Wisconsin-Whitewater, Stacy is unable to talk clearly and attends school in a wheelchair. To talk clearly, she says, is an ability she would love to have.

“Christopher Reeve really started to raise awareness of this whole issue by starting The Christopher Reeve Foundation, which supports stem cell research. Though I don’t support the idea of using embryonic stem cells for cloning purposes, I do support it for finding cures for many different medical diseases and conditions,” Ellingen said.

She emphasized Wisconsin’s key role in embryonic stem cell research. The discovery was pioneered and continues to be nurtured at the University of Wisconsin-Madison.

“Research will never be able to move forward without innovation and change,” she said.

“It was freezing cold, and Lee was crossing the street with some friends, his hands in his pockets. He went to step off a curb and at the same time turned around to someone calling his name. Then he fell,” she said.

He was initially paralyzed from the waist down, his spinal cord compressed from swelling, she said. Lee has since gained back some feeling in his arms and legs but remains disabled because of the severity of the injury.

“I have a motorized wheelchair. I can stand with the help of a walker but I have no balance,” said the 61-year-old Lee, a retired UPS driver.

Although the couple hold little hope that Lee can be helped at his age, Linda said she believes whole-heartedly in using embryonic tissue for stem cell research.

“I know there’s a moral issue, but I don’t think they should be thrown away,” Linda said, referring to the hundreds of thousands of frozen, unused embryos sitting in fertility clinics. “I’m often checking the Internet for news about regenerating nerves using stem cells.”

Lee said, “I don’t know about the ethics of it — I’m not that religious of a person — but let’s put it this way: I’d be willing to try anything.”

Diagnosed with diabetes four years ago, Kathleen Salm of Fond du Lac said she is dead set against using embryos. Her beliefs are a part of her Catholic, pro-life stance, and she is not alone.

Conservative Christian groups across the country, as well as right to life groups, are standing against research using embryos, calling the whole idea unethical and immoral.

No one has been cured of anything from embryonic stem cell research, she points out, nor has testing in human beings been done because of the dangers involved, including the frequent formation of tumors (in animal research).

“Stem cells can be obtained without killing human embryos, from umbilical cord blood and various types of adult tissue,” she said. “Approximately 70 medical conditions have been helped so far through adult stem cell research.”

A neurologist weighs in

Dr. Katherine Widnell, a neurologist with Regional Parkinson’s Clinic at Aurora Sinai Medical Center in Milwaukee, said her patients frequently ask her about the status of stem cell research related to their condition.

“There’s very exciting things being done at a research level — studies with animals that could be used in a clinical setting,” she said.

If stem cells could aid the brain of a Parkinson’s patient in producing dopamine the way a normal person’s brain does, it would be a remarkable step in treating the condition, she said.

The problem, she pointed out, lies in regulating the effects.

“We don’t want cells coming in in great excess or less than needed. To produce reliability and also the connections between the neurons — that is all essential for success,” she said.

“While I do think this is an exciting area of research, it’s not an applicable approach to Parkinson’s, at least not in the next several years,” she said.

John Whitsett, a physics instructor/curriculum support teacher at Fond du Lac High School who serves in the prestigious role of president of the NSTA, said despite the president’s recent rejection of research advances, embryonic stem cell research continues in private labs in this country and throughout the world.

“The problem is: It’s (the veto) not going to stop stem cell research. What it does is limit research in the United States while places like Pakistan, China and India have research institutes doing work on a regular basis,” he said.

Scientists believe that in the future, they will be able to regenerate nerve tissue in paraplegics, help Alzheimer’s patients retain memory function and stop tremors in patients suffering from Parkinson’s’ disease, if only they could move forward.

“I think within the decade, we will see some success. We have already been treating leukemia with a form of stem cell treatment using bone marrow for many years,” he said.

Money will be the impetus to drive research using embryonic stem calls forward, Whitsett said, along with public opinion. According to a USA Today/Gallup Poll, 58 percent of adults polled said they disapproved of the president’s decision. A recent poll conducted by the UW Survey Center indicated Wisconsin residents support the research and disagree that using embryos to seek cures is unethical.

“Wherever it happens, and I have no doubt it will happen, drug companies and private research firms will be there for the profit. I would like to see Wisconsin get a piece of this economic pie,” he said.

“It’s no accident that it’s become a difficult issue for people to understand. Because it’s a hot-button issue, politicians have tried to distort facts,” he said.

The huge expense — and public funding — fuel political debate on how the money will be spent.

Opponents of the use of embryonic stem cells focus on the destruction of human embryos in the process and the moral implications. What they don’t talk about is the fact that hundreds of thousands of these fertilized ova already exist, doomed for eventual destruction. Seligman said.

This, he said, raises the question of the morality of fertility clinics.

“Nobody wants to make that argument. Because we realize the enormous social good that comes from it, no one wants to challenge the rights of a woman to do this,” Seligman said.

Other moral implications arise in the debate, Seligman said: What about women selling their eggs to private clinics? Or using implanted embryos for stem cell research?

What is the “ethically not permissible line that can’t be crossed?” he said. “I think boundaries can be set and moral distinctions can be made.”

“We talk about the differences between adult stem cells and embryonic,” she said. “One non-ethical problem with their use is that they might become cancerous. The ethical concern is that the cluster of cells from which they arise does have the potential to develop into a human being if implanted in a uterus, so some people consider this to be like an abortion, i.e. killing a human being. My own mindset is that this is ridiculous, but I try not to let my opinions color the discussion.”

Most of her students seem to feel the same way.

“Last spring, no one took the side in a classroom debate that they should not be used,” Stevens said.

Salm said though she would like nothing better than for modern medicine to find a cure for her diabetes, she can’t see sacrificing what she believes is human life so that she can feel better.

“There are moral ways of research that would work as well or probably better than the destruction of human embryos,” she said.

Lee Sippel said, “I don’t know what to say about that. We never had children. But I’d sure love to take my dog for a walk again. Nothing is easy anymore. Everything is a lot harder.”

By Sharon Roznik
The Reporter