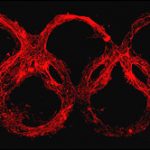 Yes, it is a picture of the Olympic rings, but the rings themselves are constructed out of living nerve cells.

This biological version of the icon of sporting excellence measures 3.4 millimetres – about one-eighth of an inch – across.

The “living rings”, as they have been dubbed, were produced by a graduate student at the University of Utah, Mike Manwaring. The state capital of Utah, Salt Lake City, is hosting the 2002 Winter Olympic Games.

The purpose was “to demonstrate technology that someday might help repair spinal cord injuries from accidents and brain damage from Alzheimer’s, Parkinson’s or other diseases”, the university said.

Patrick Tresco, an associate professor of bioengineering and director of the university’s Keck Center for Tissue Engineering, added: “It shows the public the biomedical research community’s level of achievement, just as the Olympic Games demonstrate a high level of athletic accomplishment.”

The nerve cells were grown over a bioengineered scaffold – shaped like the five Olympic rings – made of other cells, which in turn grew on a plastic material mounted on a brass plate.

“The objective of our lab is to control cell behaviour on materials,” Dr Tresco said. “So I challenged the group to create a living symbol of the Olympic Winter Games – using living nerve cells and tissue engineering technology.”

The nerve cells used to make these rings came from rats. They have been “tagged” with a fluorescent red dye to make them show up in the picture.

The experiment demonstrates how scientists are learning to manipulate cell growth.

In a past experiment, paralysed rats which had a segment of their spinal cord missing regained some function in their hind legs after researchers grew nerve tissue across a plastic scaffold placed in the gap.

Scientists concede, however, it could be many years before they are able to repeat such work in humans.

You Are How You Feel

Cursor control at the tip of your tongue