You’ve got to hand it to them 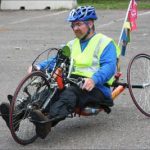 THE OLDEST MEMBER of this small group of paraplegics is 65 but every single one of them is a powerhouse of upper body strength.

“It comes from 86 days of hand-pedalling across Canada,” Les McLaughlin said during a stop in Truro Thursday.

For the record, Mr. McLaughlin is 50 years old, the father of four and grandfather of four. The Brampton, Ont., man lost the use of his legs in 1999 after an accident on an all-terrain vehicle.

He is one of four men who braved the Rocky Mountains, torrential downpours and the boredom of the road in the hopes of raising enough funding to further research into the Regeneration of deadened nerves.

And they did it all on specially improvised vehicles that allow them to pedal with their hands.

“We’re out every day, wheeling along the highway and putting our body under physical stress, and it’s all for a great cause,” said Mr. McLaughlin.

“We looked like drowned rats last night after the downpour outside Truro but we soon got dried off.”

With the zeal of missionaries, Mr. McLaughlin, his fellow wheelers, manager and helpers are determined to raise enough funds to help revolutionary research being undertaken at McMaster University in Hamilton, Ont.

“This research has been proven in rats,” he said.

“Paralyzed rats are now able to walk because of this research, and I believe some day I’ll walk again and so will anyone who has a spinal cord injury,” he said.

The research is being led by Dr. Michel Rathbone and Dr. Shucui Jiang.

Trials on rats with spinal cord injuries suggest the transplantation of adult cells from the animals’ own guts seem to lead to recovery of function. Since the cells are from the subject animal, there is less chance of rejection. Moreover, the team discovered one of the body’s naturally occurring molecules, guanosine, can stimulate stem cells in the spinal cord and help to insulate nerves.

The research could have applications in the treatment of Alzheimer’s disease, diabetes, stroke and Parkinson’s disease.

“When I talk to people along the way and I tell them I actually saw the rats walk after they had this treatment, they will sometimes have a tear in their eye,” Mr. McLaughlin said.

“With this research, human paralysis could be a thing of the past. . . . I’ll definitely walk again, I know that.”

The group plans to continue its journey, with stops in Halifax, North Sydney and Newfoundland.

Donations to the cause can be made through any branch of TD Canada Trust or through the campaign’s site at www.wheeltowalkcanada.org.

Use your voice to access the world with a new Android...