PORT ARTHUR – Kevin Everett walked toward the football field at Memorial High School and paused for yet another photograph Monday. 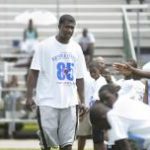 “I hadn’t seen him since right after he finished high school,” said the 46-year-old Richmond, who introduced herself as his mother’s old classmate. “I wanted to come here and see him for myself.”

Moments later, Everett turned and had another photo taken, this time with 10-year-old Trey Pitre of Port Arthur.

“Kevin has been a role model for all these kids,” said Trey’s mother, Ramona, a 48-year-old teacher at a Port Arthur alternative school.

Everett, a former National Football League player whose recovery from a spinal cord injury suffered last season is considered miraculous by many, held his second annual football camp for children between ages 4 and 18 years old Monday at Memorial.

Everett, 26, did not participate in any drills during the three-hour camp but spent much of that time filling a new role. His tasks included posing for photos, signing autographs and shaking hands with many who continue to draw inspiration from his courageous recovery.

Now, during a time when he normally would be preparing for another NFL season, Everett makes public appearances on behalf of the Kevin Everett Foundation, mostly giving speeches to help raise money for spinal cord injury research.

Wednesday, he’ll be in Los Angeles to be presented the Jimmy V Award for Perseverance in a ceremony that will be aired Sunday on ESPN.

The award is named for former college basketball coach Jim Valvano, who died of cancer in 1993.

As for Monday, Everett deflected attention to children in his hometown on a clear, sunny day in which the temperature topped 95 degrees.

“It feels great that I can come back and show these kids that just because you have tough times, don’t let it hold you down,” said Everett, whose six-inch scar on the back of his neck is evidence of his obstacle. “Be true to yourself. That’s what I’m trying to pass along to these kids.”

In doing so, Everett has learned to embrace the kind of fame he never thought would come his way before he suffered a spinal cord injury Sept. 9 while with the Buffalo Bills.

Seldom does Everett go anywhere without being told he’s an inspiration. He gives away more handshakes and smiles than a grocery store sample tray. He said the attention can be unsettling, but he’s used to it.

“I don’t really need all the pats on the back,” Everett said. “I’m doing this from the heart. I love what I’m doing here. I’m excited and happy that I am doing it.”

Through the afternoon, Everett conducted about a half-dozen interviews and posed for several photos. After the camp, he spent almost an hour signing autographs as many of the more than 300 campers ate pizza and hot dogs and collected athletic footwear given away by a shoe company.

“Kevin has always been a very quiet, shy, behind-the-scenes guy, even when he was playing football,” said Everett’s Houston-based agent, Eric Armstead. “He’s really, really quiet – laid back – but you can’t tell kids no. They may find inspiration in him.”

“You pretty much have got to poke him to say much to you,” said Thomas, who played two seasons with Thomas in Buffalo. “If he don’t know you, he’s kind of quiet and ‘Aw, shucks.'”

Thomas, who will attend the award ceremony in Los Angeles, said Everett “never wanted the attention in this way, but he’s glad he’s getting it in this way.”

As for the campers, many were thrilled to learn lessons from players with NFL experience. Helping at the camp were Thomas, Port Arthur natives James Johnson (Cincinnati Bengals) and brothers Jordan (Seattle Seahawks) and Jonathan Babineaux (Atlanta Falcons).

Other players with NFL ties at the camp were Cedric Griffin (Minnesota Vikings) and Rex Hadnot (Cleveland Browns).

Beaumont resident Terran Vaughn, 14, said he learned a new way to catch a football: “Instead of turning around to catch the ball, I look over my shoulder.”

“Just to see him and know what he overcame gives me energy,” Jolivet said.

In the end, Everett said the turnout – large enough for organizers to run out of T-shirts before everyone got one – made him feel good.

Overcoming spinal cord injuries one bungee jump at a time