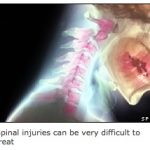 A chemical used by bacteria to invade other cells may boost the chance of successful Rehabilitation from spinal and brain injury, research suggests.

A team from the Centre for Brain Repair in Cambridge treated rats with the enzyme chondroitinase.

They found the treatment increased the length of time that the nervous system was responsive to rehab.

The study raises the possibility of faster and more effective treatments for neurological patients.

After damage to the nervous system, patients go through a rehab programme to try to regain some of the neurological function that they have lost.

This usually helps them regain some useful function but they need to work hard for a long time in order to be successful.

Rehab works by encouraging the nervous system to make new connections between cells to replace those that have been lost through injury.

However, the ability to make new connections – known as Plasticity – is very limited.

Part of the problem is that molecules called chondroitin sulphate proteoglycans (CSPGs), which are laid down around nerve cells to form protective scar tissue, prevent the formation of new connections.

But scientists have discovered that chondroitinase specifically targets these molecules for destruction.

The Cambridge team used the enzyme to treat rats with a spinal cord injury which meant that they lost the ability to grasp objects in their paws. 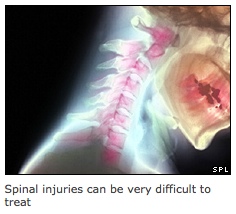 They found that chondroitinase treatment or rehab alone had little impact on the animals.

But when the two treatments were combined, they noted a large improvement in the ability of the animals to use their paws.

The researchers, led by Professor James Fawcett and Dr Guillermo Garcia-Alias, said: “The discovery opens up the possibility that rehabilitation for neurological conditions can be made much faster and much more effective by giving treatment such as chondroitinase to make the nervous system plastic.”

However, he stressed that it was vital that rehab programmes were chosen carefully to maximise the therapeutic impact.

He said: “These results can only be seen as extremely encouraging for the many thousands of people left paralysed after a spinal cord injury but the next step is to work out how to deliver this bacterial protein to humans in a safe and effective way.”

Details of the research will be presented to a Federation of European Neuroscience Societies conference in Geneva.

These results can only be seen as extremely encouraging for the many thousands of people left paralysed after a spinal cord injury.