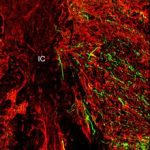 The researcher who found a way to get paralyzed rats back walking is now in Colorado and predicts huge breakthroughs in treatment of human spinal cord injuries in half a decade.

“We’ve reached a stage where I’m comfortable saying that within the next five years, we will have truly effective new therapies from people with spinal cord injuries,” Dr. Stephen Davies said this week.

Talent scouts last year persuaded Dr. Stephen Davies to leave his neurology lab at the Baylor School of Medicine in Texas for the new Anschutz Medical Campus in Aurora, part of the University of Colorado’s Health Sciences Center.

Davies brought with him his methods of regenerating damaged spinal cords by suppressing scar tissue and by injecting special cells into the injury.

The two-pronged attack is being used on rats right now, but he predicts there will be human trials within four or five years.

First, he uses a naturally occurring molecule, decorin, to suppress the scar tissue that forms when a spinal cord has been badly bruised or severed.

By blocking the formation of scar tissue, decorin helps the sensory nerve fibers cross the area of the spinal cord injury and reconnect to viable nerves, said Davies, an associate professor in CU’s department of neurosurgery and head of the neuro-repair lab.

His lab has the gene for the molecule and is working with a biotech company to develop a pharmaceutical-grade decorin that will be ready for the human trials.

Integra Life Sciences out of Piscataway, N.J., is developing the decorin.

The decorin molecule could prove to be helpful even for those people whose spinal cord injuries were five or more years ago by breaking down the scar tissues that has blocked the nerves from attempting to repair themselves.

Astrocytes are the cells that make up 70 percent of the nervous system, even though they are not as well known as neurons, he said.

Working with precursor cells, Davies and his colleagues came up with a way to nudge the precursor cells into astrocytes that have a particular knack for healing.

“They’re able to promote robust Regeneration of nerve fibers across the injury,” Davies said. In the rats, “40 percent of the sensory nerve fibers crossed the spinal cord injuries in eight days when we put in the astrocytes.”

Within 14 days, the rats were back to their walking pace before their injuries. “We’re very excited about the potential of these cells,” Davies said.

When the astrocytes are injected at the point of injury, not only do they form a bridge, but they protect the cells in the injured spinal cord from dying, Davies said. That allows the surviving circuits to make new extra connections on their own.

“The idea is to combine the two therapies,” decorin and astrocytes, he said.

He is hoping the Department of Defense will continue to show interest in the two therapies.

“If decorin turns out to be as promising as we think it is, it may be included in a kit on the battlefield,” Davies said. Medics could administer decorin to prevent scarring from the early moments of the spinal cord injury. “Early intervention is always the best.”

Davies expects to work with the world-renowned Craig Rehabilitation Hospital in Englewood because Physical Therapy is such an important complement to genetic and cell-based treatments for patients.

Dr. Wise Young, a neuroscientist and director of Rutgers University’s W.M. Keck Center for Collaborative Neuroscience, recently commented on Davies’ work, saying, “This is going to create a lot of excitement in the field,” and will give a lot of impetus to the push for human trials of spinal injury repair.