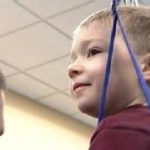 He fell and hit the back of his head on the wooden arm of a couch at a baby sitter’s, and within days he was paralyzed, unable to move due to a spinal cord injury.

“How can you tell a child who is active that he will not be active again based on what the doctors have told you?” said his mother, Renee.

In stepped researchers from the University of Louisville and Frazier Rehab.

With funding from the Christopher & Dana Reeve Foundation and support from the Centers for Disease Control & Prevention, some 25 doctors and physical therapists have used repetitive activity to redesign Chase’s nervous system, allowing him to walk.

“He still has some gate deviations, but we’re hopeful that those will recover as well,” said Dr. Susan Harkema, who calls Chase’s recovery unprecedented, and the research breakthrough for anyone dealing with the results of a spinal cord injury.

Funding is the only thing right now standing in the way of even more success.

That’s why Chase is actually going to take part in this year’s Derby Festival Mini Marathon, hoping other runners or walkers will join his fight.

You can help if you take part in team reeve in the upcoming mini marathon. The money that’s raised will stay here locally to help people like Chase.

“We’re just continuing to watch and respond to his changes and modify the program to promote the next level of recovery,” said Harkema. “So, we’ll see.”

“We would like the opportunity to finish the job,” said Lee Smith, Chase’s Physical Therapist. “He can stand and he can walk, but I don’t believe Chase’s recovery is done yet and we would like to see how far we can go.”