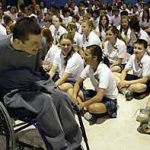 It was close to midnight on a hot June night in 1992 when Eric Wildt dived into a friend’s in-ground swimming pool.

His head hit the bottom, and he broke his neck.

That one late-night dive turned Wildt into a quadriplegic at age 17.

Last week, Wildt rolled into the gym at St. Ignatius School in Monfort Heights, pushing his wheelchair with the heel of one hand while he punched the air with his other arm and flashed an infectious grin.

“How’re you doing?” he called to the 300-plus students sitting cross-legged on the gym floor.

When the answer was less than enthusiastic, Wildt wheeled in close and worked the crowd.

“You’ve only got two days of school left. Tell me how you are.”

Shouts and squeals bounced off the gym walls, and Wildt feigned a shock wave as the laughter roared over him.

If anyone was thinking of feeling sorry for this skinny guy in the big-wheeled chair, Wildt squashed the impulse.

“I don’t want people to feel sorry for me,” he said later. “But I want them to think.”

Wildt is one of the VIPs of TriHealth ThinkFirst, a chapter of the ThinkFirst National Injury Prevention Foundation, which has been educating people in Greater Cincinnati and Northern Kentucky about the dangers of head and spine injuries for 21 years.

VIP stands for Voices for Injury Prevention. It means Wildt knows the danger from personal experience.

He and other ThinkFirst educators have been especially busy in the last weeks of school, trying to make sure all the children who walk out of school and into summer can walk back in the fall.

“It can happen real fast, and you can’t take it back,” said Wildt, 32, of Colerain Township.

“I woke up on that day like any other day. I was going out to have a good time. It was a Friday night,” he said.

A bunch of guys ended up at a friend’s in-ground pool around midnight.

His friend told him later that he thought Eric might hit bottom because he leaped high into the dive.

He floated to the surface and his friends noticed something was wrong.

“If we were drinking, they probably would have thought I was kidding and I would have drowned,” Wildt said. “But we weren’t drinking. We were just having fun.”

His friends jumped in and pulled him out of the pool. They thought they were saving him, but pulling him out may have exacerbated the damage.

“We don’t know if that made it worse or not,” he said. “But it could have. They didn’t know what to do. That’s why we’re telling you.”

The safest response if someone has a diving accident is to support the person’s head and neck and gently turn the person in the water so he is facing up and can breathe, said Kristi Martines, professor of neurobiology at Northern Kentucky University who volunteers with ThinkFirst to handle the health care portion of community programs.

If there are several people around, one should call 911 and stand near the road to flag the emergency crew while others keep the victim’s body supported and flat in the water.

Martines uses a model of a spine to show children how the spinal cord, which is a flexible rope-like bundle of nerves and supporting tissue, runs through openings in the spinal column and neck bones. If those bones are broken or knocked out of alignment, it can damage the spinal cord.

Depending on where the cord is damaged, it can affect breathing and movement of arms, hands, fingers, legs, feet.

Wildt’s injury was at the C-5 vertebrae. He can move his shoulders and lift his arms, but he can’t flex his fingers, he has no strength in his lower arms, and can’t use his legs.

A black wrap-around glove supports his wrists and helps him use the heel of his hand to roll his wheelchair. To remove the glove, he grabs the Velcro tab and rips it open with his teeth.

“There’s a lot of things I can’t do. When I lean over, I have to hold my legs because I don’t have any stomach muscles,” he said. “But I learned to do as much as I can. I can feed my pets. I can cook my dinner.”

He drives his own van, with a wheelchair lift and hand controls, to get to speaking engagements.

Last week he was at St. Ignatius School. Last month he was part of a neurotrauma prevention day sponsored by the Neuroscience Institute at the University of Cincinnati and University Hospital, where most serious head and spine trauma victims are treated locally.

Neuro-intensivist Dr. Lori Shutter deals with patients with severe head and spinal cord injuries during the first hours and days after the injury and has been part of several ThinkFirst programs.

The 20-bed neurointensive care unit where she works at University Hospital has a steady stream of patients who end up there from car wrecks, falls, gunshot wounds, sports injuries and swimming accidents.

The bones of the neck and spine are designed to protect that rope of nerves, but if the bones are pushed out of alignment or broken, the cord can get compressed and that’s when the damage happens.

“The cord can tolerate a temporary disruption. But any compression that is maintained for any time – and it can be as quick as five minutes – can cause permanent damage to the nerves,” she said.

When there is permanent damage, there usually is temporary bruising along the edge of the permanent damage. That’s why some patients regain some functions that may initially be paralyzed. But any paralysis that remains after the first two weeks is usually permanent, she said.

Part of her job is to explain her patients’ conditions and their likely future.

“The first reaction is complete denial – the doctors don’t know what they’re talking about,” she said.

“If you just break the bones, you will be able to walk again. But if there is spinal cord damage, that is a permanent problem,” she said.

“I encourage patients to come back and visit. Everyone I have seen come back has come back in their wheelchair.”

Brain and spine surgeons across the region are cheerleaders for the ThinkFirst program.

Saul also speaks regularly about accident prevention. The warnings are especially urgent at the beginning of summer, when it’s only a matter of time before the first swimming and diving accidents start filling beds in neurosurgery units.

“We had one case where a young man on a boat decided to climb a bridge pylon and dive off. He slipped and fell and had significant head and spinal cord injuries,” said Shutter.

“I’ve seen people who dive into pools that are too shallow.”

She said Kentucky’s Lake Cumberland is a special concern this year. The lake has been lowered by more than 40 feet to make dam repairs.

“If people are used to boating in certain areas in Lake Cumberland, places that might have been safe before might not be safe now,” said Shutter. “There might be rocks or debris under the surface.”

Part of the ThinkFirst campaign is a slogan, “Feet First, First Time,” to remind divers to test the area feet first before diving.

As Eric Wildt rolled around the St. Ignatius gym, he repeated the slogan again and again.

Wildt has been a VIP with ThinkFirst for four years, but he’s been dealing with his disability for 15 years.

It wasn’t an easy transition. Wildt grew up in Northside. He dropped out of high school and worked construction jobs before his accident.

Within a year of getting out of the hospital, both parents had left him to handle his problem on his own.

He had no education, no job skills that were still useable, and needed substantial care.

“I was really depressed for the first couple of years,” he said.

His life changed when he met his girlfriend. She was a friend of a friend, and they hit if off immediately.

She encouraged him to get his GED. He got a college degree in media technology and is getting a second degree in graphic arts.