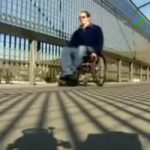 (KABC-TV) – Stem cell therapy is the next frontier in medicine. Scientists hope to someday use stem cells as the ultimate body-repair kit, growing new tissue and replacing damaged organs.

But the science isn’t moving fast enough for some people.

They are traveling out of the U.S. to get stem cell injections that are illegal here.

Some claim the injections can cure everything from autism to Alzheimer’s and paralysis.

Twenty-nine-year old Greg Minow was a lieutenant in the 101st Airborne Division of the Army. He survived his tour of duty in Iraq without a scratch. But within months of his homecoming, Greg was paralyzed, his T6 and T7 Vertebrae crushed, as one neurosurgeon put it, crushed to a paste.

“The bike flipped over, and when I landed the bike landed on me … it felt weird … kind of like my body was dead,” Minow said.

“I think that’s when it hit me, I could be paralyzed … I remember being scared, I was scared,” Minow said.

He was scared, but not defeated.

Greg lost the use of his legs that day, but gained a new mission in life.

“Ultimately I’d like to learn to walk again,” he said.

Tijuana, Mexico, is just a short trip from Greg’s San Diego-area home. He literally rolls across the border, into a country with fewer regulations over medical treatments, but greater hope for those who believe in this type of alternative treatment.

“I’m here kind of as a guinea pig you could say that,” Minow said.

We asked where he gets the stem cells, but his answers kept changing.

“Research centers in the United States … we have a great thing from the FDA, they check on quality of the cells,” Dr. Ramirez said.

But the FDA told us, that’s not true.

On the day of Greg’s surgery, we asked Dr. Ramirez again.

“They are coming from Mexican research laboratories,” Dr. Ramirez told us.

Minutes before he was wheeled into surgery, Greg remained optimistic.

“It’s amazing because (a) little vial could let me walk again,” Minow said.

Leading stem cell researchers on the U.S. side of the border have their doubts, to say the least.

“A lot of patients are being fooled,” Dr. Evan Snyder, a stem cell researcher at Burnham Institute, said.

Dr. Snyder is at the forefront of U.S. stem cell research.

Everything from ALS to autism, diabetes and strokes, Dr. Ramirez claims his cells can do it all.

“If you look at his list it reads like the contents of a medical textbook … I think in all respects this is wrong … at best deceptive and at worst, absolutely dangerous,” Dr. Snyder said.

But it’s a risk Greg is willing to take.

“I’m not nervous, I’m anxious … hopefully in six months, I’ll be reporting that I’ll be walking again,” he said.

On Thursday he told us he’s regained quite a bit of sensation about two inches below the level of his injury.

Greg is doing some walking as part of his physical therapy, it’s with the help of braces and forearm crutches.

Here’s something to keep in mind – there’s no way to know how much of Greg’s progress is from the stem cells and how much can be attributed to the spinal cord decompression surgery.