‘The injury doesn’t change who you are,’ says Coquitlam man 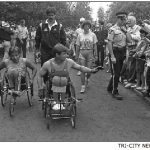 Rick Hansen made history with his journey around the world but it was only the beginning of what would become his lifelong dream.

With the establishment of the Rick Hansen Foundation in 1988, the Man in Motion has been steadily moving toward that dream of a fully accessible and inclusive society, and a cure for spinal cord injury. Since raising $26 million with his worldwide tour 20 years ago, the Foundation has dedicated more than $178 million to spinal cord injury research and quality-of-life initiatives.

Coquitlam’s Don Danbrook is just one of many who has benefited from Hansen’s efforts on behalf of those with spinal cord injuries.

In the early 1980s, Danbrook was a strapping young man of 24. He was travelling throughout B.C. and Alberta, working as a welder on oil rigs and dams. He’d settled in Victoria and, on a sunny afternoon in August 1983, came home and found himself locked out.

He took a step back, intent on kicking the door in but he stumbled over a box on the patio. The last thing he remembers is pitching backwards over the railing, falling to the ground about six feet below.

Later, in hospital, Danbrook learned he’d landed on his head. He’d broken his neck and was paralysed from the shoulders down. The pain was excruciating.

“The rest is a bit of a blur of morphine, nightmares and hallucinations,” Danbrook recalled.

He spent months in rehab, enduring surgery that fused and wired together bones in his neck that had been crunched to pieces.

“It’s a shock to go from running around on beams 250 feet in the air to…” he drifts off. “It’s pretty devastating.”

Danbrook figured that was it. Life as he knew it was over, and he was forced to grapple with a new one, without the use of his legs, arms or hands. He thought he would never work again.

He couldn’t have been more wrong. While in hospital, a nurse asked him if he wanted to learn about computers.

“She said a guy in Victoria was doing it and was going to university,” he remembered. “I said, ‘Well, can he use his hands?’”

He was skeptical but figured he would give it a shot. He discovered a surprising aptitude for math — without the aid of scribbling notes to solve complex equations — and became an accountant, eventually working with Revenue Canada.

But he didn’t stop there. Danbrook has completed a business finance program at Langara College, has worked as a real estate agent and is now a property manager.

He was still in the early stages of learning ways to cope with his spinal cord injury when he heard of a Paraplegic who was planning to wheel around the world. At the G.F. Strong Rehabilitation centre at UBC, Danbrook remembers “seeing a guy just pumping and wheeling,” training like mad.

He admits he didn’t give it a lot of thought, still overwhelmed by his own injury.

But the changes that came about because of that Man in Motion tour have made a significant impact on Danbrook.

“I remember when I first broke my neck, I was thinking I would never go into a restaurant or bar again. Before this, I had never even seen a chair like mine,” he says of the $20,000 machine he operates by blowing into various straws.

Accessibility has come a long way since then and Danbrook, who volunteers as an ambassador for the Rick Hansen Foundation, attributes it to Hansen’s efforts. Until the mid-1990s Danbrook had to schedule a HandyDART or taxi to get around; now, buses are wheelchair accessible, making it easier to get around.

Research into improving quality of life for those with spinal cord injuries means chairs like Danbrook’s are more comfortable, easier to manoeuvre and enable him to do things like use the phone. And changes to building codes mean Danbrook can access just about any restaurant, bar, shop or office.

He remembers a downtown office building he worked at in 1992; getting up the elevator wasn’t a problem but punching in the security code to get into the office was. Danbrook often had to sit outside the door, waiting for somebody else to buzz him in (it was eventually replaced with a plate in the floor that did the job).

“That’s just the way it was,” he said with smile. “I was just happy to be working.”

Happy because he remembers feeling limited in his job choices as a field auditor — which often required having a valid driver’s licence and transportation. He didn’t even bother applying for those jobs, until Hansen pushed for employment equity for people with spinal cord injuries.

“It’s just one of the things Rick did, changing the mobility requirement to ‘the same as having a driver’s licence,’” Danbrook said, but it opened a world of opportunities for his career and quality of life. He’s part of the BC Paraplegic Association’s Peer Program, is on the board of directors and is treasurer for the Neil Squire Foundation, and speaks at local schools as a Rick Hansen ambassador.

“It’s important for the kids to see that people can overcome challenges when they’re put to the test,” Danbrook said. “The injury doesn’t change who you are. You’re still the same person, you just have to do things differently. The kids have to see that.”

And if his work improves just one person’s life in the community, he adds, it makes the whole community better.

“Someone asked me once what my dreams are,” he said. “I’m living it — I work where I want, I live where I want.

“What does Rick say? ‘If you believe in a dream, and have the courage to try, great things can be accomplished.’”

By Sarah Payne The Tri-City News