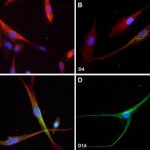 ScienceDaily – Scientists from Université Laval’s Faculty of Medicine have succeeded in producing neurons in vitro using stem cells extracted from adult human skin. This is the first time such an advanced state of nerve cell differentiation has been achieved from human skin, according to lead researcher Professor François Berthod. This breakthrough could eventually lead to revolutionary advances in the treatment of neurodegenerative illnesses such as Parkinson’s disease. Berthod and his team described the method used to produce these neurons in a recent issue of the Journal of Cellular Physiology.

The researchers used skin obtained from plastic surgery procedures. They subjected these skin samples to various treatments in order to extract neuron precursor cells, which they then proceeded to cultivate in vitro. Skin itself does not contain neurons, which are hosted in the spinal cord, but contains only their extensions, called “axons.” The researchers’ challenge was thus to produce neurons from undifferentiated cells rather than multiply neurons from nerve cells.

Tests conducted by the researchers demonstrated that stem cells from the skin can proliferate and differentiate in vitro when placed in the appropriate Environment. They progressively took on the oblong shape typical of neurons. At the biochemical level, researchers discovered that in the days following the start of the experiment, the cells began producing markers and molecules associated with the transmission of Nerve Impulse between neurons. “This suggests the beginning of Synapse formation between neurons,” points out Professor Berthod.

In the short term, this breakthrough might have an impact in the field of neuroscience research. “Producing neurons from skin cells could solve the problem of human neural cell availability for research,” explains Berthod. “Since neurons do not multiply, researchers now have to rely on laboratory animal neurons to perform their experiments.”

In the longer term, the ability to produce neurons from skin cells opens the door to revolutionary therapeutic applications. “We could take a patient’s skin cells and use them to produce perfectly compatible neurons, thus eliminating the risk of rejection. We could then transplant these nerve cells in the diseased areas of the brain,” explains Berthod. “This type of procedure seems particularly interesting for diseases such as Parkinson’s, but it’s all theoretical for now. Before we can think of doing such things, we’ll have to improve nerve cell differentiation and prove that they can transmit nerve impulses,” concludes the researcher.

Note: This story has been adapted from a news release issued by Université Laval.