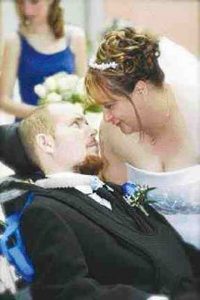 Rick and Angel Young were married at Royal Victoria Hospital.

With a pen held in his teeth, Rick Young carefully marked an X on his marriage certificate.

It was a struggle.

He had to try twice.

But it was important.

As a quadriplegic, there are many things Rick cannot do on his own – breathe, eat, move – but professing his love for his childhood sweetheart was one thing he had to do.

And so, on Nov. 4, among family, friends, a respiratory therapist, a doctor, several CCU nurses and hospital staff, Angel Robinson, 25, and Rick Young, 26, exchanged their wedding vows in the Garden Patio of Royal Victoria Hospital in Barrie.

Their honeymoon suite was adjoining rooms in the hospital’s critical care unit decorated in a Hawaiian theme by the nurses.

And while tears flowed during the ceremony because of the deep sadness of the situation, the bride only saw her groom.

She did not see the wheelchair, the Ventilator, the respiratory technician standing by, nor did it matter that her wedding ceremony was being held in a hospital.

All she saw was the man she loves.

And when asked why the couple chose now to get married, Angel’s answer comes without hesitation.

“Because, he is the love of my life. It doesn’t matter that he is in a wheelchair. He is still Rick.”

Escorted by her two young boys, Dylan, 2, and Nolan, 4, each carrying a teddy bear, Angel entered the Garden Patio in a beautiful strapless white gown and beaming as if it was St. Paul’s Cathedral. In her eyes, she was marrying her prince and in keeping with that attitude, the Garden Patio had been transformed from an institutional patio to a magical setting with twinkle lights, white organza and floral arrangements.

“It was so nice to see Angel wearing a dress. I can’t believe this is really happening. I can’t believe how good she looked,” said Rick, communicating through Angel. “This is how I keep my spirits up – knowing that Angel and the boys love me.”

“We met when I was only 16,” said Angel, in an interview before the ceremony. “My family moved next door to his. He was the first person I met when we moved there and we just clicked.”

So much so, that a horrible accident couldn’t break their bond.

Five months earlier, on May 27, just before midnight a car hit Rick as he tried to cross Highway 9. He had been visiting family in Keswick and was hitchhiking home to Barrie. Angel will never forget that night.

“I had a police officer knock on my door. My first thought when I saw him was, ‘Oh, Rick is in trouble.'”

Once she heard what had happened she was sure it was simply a case of mistaken identity. That was until she saw him at Sunnybrook Hospital.

“I just couldn’t believe it was happening. I mean, you hear about this kind of thing happening to people, but you just never think it will happen to you,” she said. “I cried for two days straight.”

Angel stayed by Rick’s side watching him, stroking his head, talking to him and waiting for his eyes to open.

When Rick finally awoke he was a quadriplegic with C1 and C2 spinal breaks. In comparison, Rick’s injuries were worse than those suffered by the late Christopher Reeves.

Rick stayed at Sunnybrook Hospital until July and was then transferred to Royal Victoria Hospital’s CCU.

It was then the couple began discussing their future.

“I always wanted to marry Rick. I just love him so much. Every day I go in to see him at the hospital and he just brightens my day,” she said. “I know he was afraid I was going to leave him. That wouldn’t happen. Just because he had an accident doesn’t mean I’ve changed the way I feel. So, I asked him if he still wanted to marry me.”

The answer came quickly, through a communication system of blinking for ‘yes’ or ‘no’, Rick immediately signaled, ‘Yes, Yes, Yes.’

“I said, “You really do love me. I’ll marry you today if you want.”

Rick wanted a real wedding – minister, music, guests and all the trimmings.

“I was just so overwhelmed by the tragedy of the situation and the love that these two share, that when I heard they wanted to get married I thought ‘I can make it happen and for little or next to nothing,” said Clifford, who has a home business as a wedding planner called Wedding Ties (www.weddingties.ca).

And with that, Clifford became the official wedding planner, using all her contacts for everything from flowers and a vocalist to photography and salon services, enlisting the help of hospital staff for decorating, catering, and medical support during the ceremony.

Everyone who became involved in this wedding was touched by both the sadness and the joy of the situation. Clifford will admit she was blown away by the kindness of both vendors and volunteers who wanted to help to make Angel and Rick’s wedding special.

The nurses in CCU helped Rick dress in his tuxedo on the day of the wedding. Previously they had helped him pick out a beautiful heart-shaped pendant and chain for Angel.

“We were all happy to do what we could to share in this joyous occasion. Obviously Rick and Angel have had huge challenges in their young lives, and this was a chance for all of us to share in a very happy time with them, in contrast to all the difficulties they have had to face,” said nurse Mary Fitzgerald. “After 10 years together and becoming parents to two beautiful little boys, it seems a right and fitting thing for them to ‘make it official’ by becoming husband and wife. Rick has lost so much autonomy with this severe injury to his spinal cord, but he was not about to give up the chance to marry Angel. It is important that we CCU team-members support Rick in the decisions he is able to make about his life. He was always adamant about getting married to Angel, so we are all delighted to see Rick achieve his goal.”

Almost daily, Clifford’s contacts would donate services or items for the wedding, but it was the choice of blue roses that confirmed the couple was on the right track.

“Angel wanted blue and white for the wedding colours and, of course, blue roses. I found out that the meaning of blue roses is – ‘hoping for a miracle and new possibilities’. When I told Angel, she couldn’t believe it,” said Clifford.

“That’s what I do every day – I pray for a miracle,” said Angel.

And now as a married woman with two small children at home and a husband in a wheelchair at Royal Victoria Hospital’s CCU, Angel knows there are rough roads ahead but she, like the blue roses at her wedding, keeps ever positive.

“I hope Rick and I are happy for as long as we have together.”

Editor’s note: The staff of The Barrie Advance “adopted” the Young family as part of our Christmas giving program this year. We hope our contributions of clothes, toys, food and money will help make the holiday brighter for the family.

Donna Danyluk is the public affairs co-ordinator for Royal Victoria Hospital in Barrie.